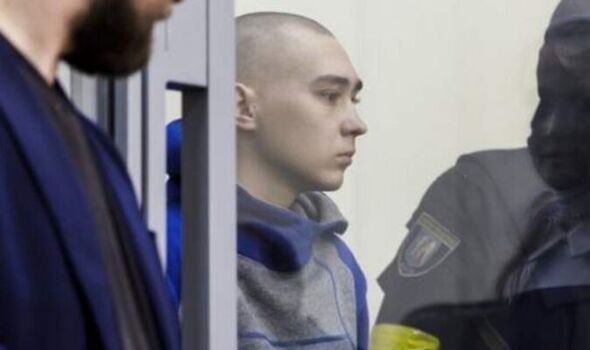 The case will be of huge significance to the Ukrainian cause as defending forces continue to fend off invading Russian troops. The guilty plea also signifies recognition from the invading force that war crimes have been committed in Ukraine, something Vladimir Putin has repeatedly denied.

Vadim Shishimarin, a 21-year-old Russian tank commander held in Ukraine, was charged with murdering a 62-year-old civilian in the northeast Ukrainian village of Chupakhivka on February 28. He told the court that he pleaded guilty.

If convicted, Mr Shishimarin faces up to life imprisonment.

The Ukrainian Government has accused Russian forces of atrocities against civilians and has said publicly that it has identified more than 10,000 possible war crimes so far.

The UK was one of a record number of countries to refer Russia to the International Criminal Court (ICC) for alleged war crimes in the opening phases of the war.

The ICC has already opened an investigation and has said it is willing to add further alleged atrocities to the scope of its case.

Bleak images of civilian bodies amassed in body bags in Bucha, a suburb of Kyiv, and reports of indiscriminate rape and murder in Russian-occupied territories have emerged in the past three months.

Early on in the war, the world was horrified when a Russian air strike hit a maternity hospital in Mariupol, killing three including a child and wounding a further 17.

The last bastion of Ukrainian soldiers in Mariupol, who had been fending off encircling Russian forces for weeks, have now been evacuated with many heavily wounded, and the city is entirely under Russian control. Reuters reports they now face war crimes trials in Russia.

Ukrainian state prosecutors said the soldier and four other Russian servicemen fired at and stole a privately owned car.

They did so to escape after their column was targeted by Ukrainian forces.

The Russian soldiers drove into the village of Chupakhivka where they saw an unarmed resident riding a bicycle and talking on his phone, they said.

They claimed Shishimarin was ordered by another serviceman to kill the civilian to prevent him reporting on the Russians’ presence and fired several shots through the open window of the car with an assault rifle at the civilian’s head.

The civilian died on the spot.