Gulf nations step up measures against coronavirus as infections continue to rise. 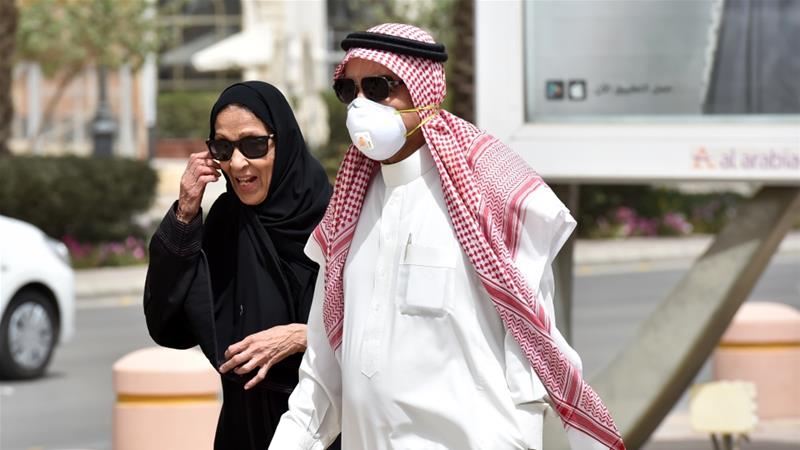 Saudi Arabia will impose a nationwide curfew from Monday evening, while the United Arab Emirates has announced the suspension of all passenger and transit flights as the coronavirus cases in the world continue to increase.

Saudi King Salman ordered a curfew to slow the spread of the coronavirus, state news agency SPA reported. The curfew will be enforced from 7pm to 6am for 21 days.

The UAE, which has 153 reported coronavirus cases, said it will suspend all flights to and from the country for two weeks, state news agency WAM said on Monday, adding that cargo operations will continue.

The UAE’s Ministry of Health has decided to close shopping and commercial centres, leaving open pharmacies and supermarkets, along with fish, vegetables and meat markets dealing with wholesalers, WAM reported. It will limit restaurants to delivery services.

WAM said the closures will take effect in 48 hours and will last for two weeks, subject to review and evaluation.

The UAE has urged the public to stay at home except in cases of necessity, including getting supplies, such as food and medicine, or performing “essential jobs”, WAM said.

On Sunday, Saudi Arabia recorded 119 new cases of the virus for a total of 511, the highest number in the Gulf region, the Health Ministry said.

The tally of cases in the six-nation Gulf Cooperation Council now stands at more than 1,700.

The UAE, the region’s tourism and business hub, approved an additional 16 billion dirhams ($4.4bn) on Sunday for a total stimulus package of 126 billion dirhams, according to a tweet from its vice president, Sheikh Mohammed bin Rashid al-Maktoum, the ruler of Dubai.

The tourism and hospitality sector in Dubai, the region’s most diversified economy, has been hit hard by the disruption to global travel because of the coronavirus pandemic.

Emirates, based in Dubai and one of the world’s biggest airlines, said on Sunday it would suspend passenger operations – with the exception of repatriation flights to 13 countries – by Wednesday.

Muscat also announced that the government would reduce government services to 30 percent of total employees, adding that the rest will work remotely, according to the state media.

Bahrain ordered all stores except those supplying essential goods to shut.

It reported a second death on Sunday, a citizen evacuated from Iran, taking the GCC’s total number of deaths to four. Bahrain has 335 reported cases.

In Kuwait, where a daily curfew from 4pm until 5am is in place, some supermarkets were allowing only 50 shoppers at a time. The country had 188 confirmed cases as of Monday.

Qatar, which has 494 cases, has begun installing checkpoints to enforce a ban on public gatherings. Parks and public beaches remain closed as the government announced a hotline for people to report breaches of the ban.