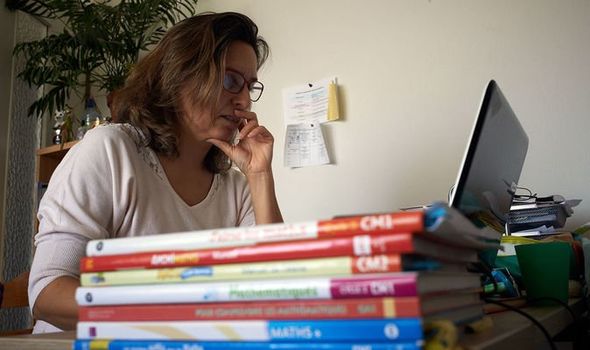 After a relentless increase until the first week of April, the number of patients in intensive care has started to decline, prompting health officials to call a plateau in the epidemic. The decision to reopen crèches and primary and secondary schools from May 11 is “unreasonable and incomprehensible,” Mme Le Pen told France Info radio in an interview.

“The French don’t understand why the government wants to reopen schools – despite knowing full well that children will flout social distancing rules – but refuses to reopen hotels and restaurants,” she continued.

The Macron administration is prepared to stand by its decision, government spokeswoman Sibeth Ndiaye said later on Tuesday.

“The health security of school children and staff is our number one priority,” Mme Ndiaye told Europe 1 radio, as she stressed that schools would reopen “progressively” and not overnight.

M Macron on Monday announced he was extending the virtual lockdown until May 11, saying that restrictions on movement could start to be eased from then if current positive trends continued.

Schools and some shops will gradually reopen, he said, but restaurants, cafés and cinemas will have to remain closed longer.

Since March 17, France’s 67 million people have been ordered to stay at home except to buy food, go to work, seek medical care or exercise alone.

“When will we be able to return to a normal life? I would love to be able to answer you. But to be frank, I have to humbly tell you we don’t have the definitive answers,” the 42-year-old centrist said in a televised address.

“Were we prepared for this crisis? On the face of it, not enough. But we coped,” he added.

After a staggering increase until the first week of April, the number of patients in a critical condition needing life support has finally started to decline, prompting health officials to call a plateau in the epidemic.

“This is the first fall. We must welcome it but we must remain careful and await the evolution in the next few days,” health chief Jerome Salomon told a daily press briefing.

In another sign the infection rate is slowing, the number of reported coronavirus infections rose by 3,217 or just 2.5 percent to a total of 133,470.

However, the total number of people who died from coronavirus infection jumped by 1,438 (9.1 percent) to 17,167 – the biggest one-day increase to date –, after a number of nursing homes reported cumulative tolls following the three-day Easter weekend.