Senator Lindsey Graham says he has a breakthrough Covid infection. 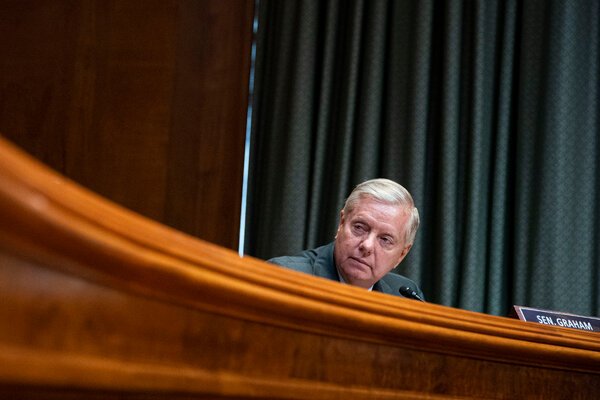 By Zach Montague and Nicholas Fandos

Senator Lindsey Graham of South Carolina announced on Monday that he had tested positive for Covid-19 and that his symptoms have been mild, which he attributed to having received the vaccine.

“I am very glad I was vaccinated because without vaccination I am certain I would not feel as well as I do now,” Mr. Graham, a Republican, wrote on Twitter. “My symptoms would be far worse.”

I was just informed by the House physician I have tested positive for #COVID19 even after being vaccinated.

I started having flu-like symptoms Saturday night and went to the doctor this morning.

Mr. Graham said he would go into quarantine for 10 days.

With the Delta variant continuing to spread aggressively across parts of the country, infections in vaccinated people have become more common, though they are still rare among the vaccinated population.

Experts say the vaccines currently in use in the United State provide strong protection from serious illness and death, even in cases of infections with the Delta variant. More than 97 percent of people who have been hospitalized recently for Covid-19 have been unvaccinated.

Breakthrough cases were reported last week both on Capitol Hill and in the White House. At least six Texas Democrats, a White House aide and an aide to Speaker Nancy Pelosi reported testing positive despite having been vaccinated.

A number of Republicans in Congress, particularly in the House, have not received a shot and have resisted wearing masks and other mitigation measures. But Mr. Graham has urged supporters to get vaccinated and has spoken out against disinformation related to the virus.

The announcement from Mr. Graham raised concerns that other colleagues of his in the Senate may have been exposed through recent contact with Mr. Graham.

Mr. Graham’s office confirmed that he attended a gathering of senators on Saturday aboard “Almost Heaven,” a houseboat belonging to Senator Joe Manchin III, Democrat of West Virginia. A photograph circulated over the weekend showed senators socializing on the boat as it navigated the waters around Washington.

“There was no celebration,” Mr. Manchin, who tested negative on Monday, told reporters of the gathering. “We were just trying to keep people together. We do everything in a bipartisan way.”

At least half a dozen other senators confirmed they were on board, including Senator John Thune of South Dakota, the No. 2 Republican in the chamber.

Mr. Thune’s spokesman, Ryan Wrasse, said that his boss was vaccinated and had tested negative on Monday afternoon. Other senators were awaiting results but showed up to cast votes on the Senate floor.

The news of Mr. Graham’s positive test — and the possibility that more of his colleagues may have been exposed — threw a new element of unpredictability into a week that was already expected to be a momentous one on Capitol Hill as the Senate pushes toward voting on a massive bipartisan infrastructure bill.

Mr. Graham has been a supporter of the bill, and if he remains absent long enough, his illness could cost a Republican vote on final passage. But if others become sick or are forced to quarantine, party leaders may have to cancel meetings, delay votes or adjourn the Senate altogether, as they did during similar episodes in 2020.

Already on Monday, Democrats made an in-person leadership meeting virtual instead. But Senator Chuck Schumer, Democrat of New York and the majority leader, told reporters he believed the infrastructure debate would move forward as planned.