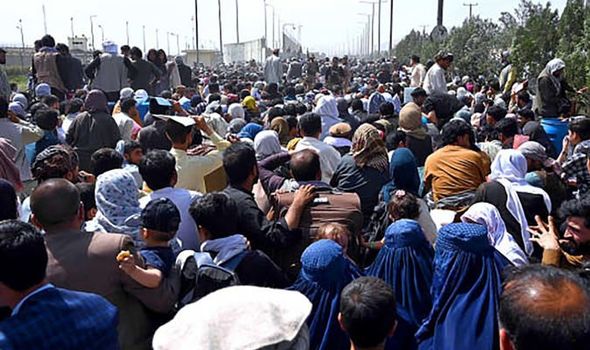 Horrifying images from Hamid Karzai International Airport continued to emerge, with bodies lying in the dirt and families crammed into hot, dusty pens. They surfaced as military veterans launched the #DigitalDunkirk social media campaign to help the thousands of people trying to escape Kabul.

Victims of the airport chaos were all Afghan civilians caught up in stampedes at the perimeter gate on Saturday.

Footage broadcast by Sky News showed thousands of people queuing in desperation to obtain visas for an emergency flight out.

Families waited in rubbish-strewn holding pens alongside the barbed wire perimeter fence as British and American troops tried to hold the line.

At least three corpses could be seen lying on the ground nearby, covered in white sheets as people, including young children, fainted from heat stroke and dehydration. Soldiers sprayed the crowd with water to cool them down.

British journalist Kim Sengupta said he saw four people die in the crushes, adding: “There was a sudden surge.

“People started dying. All women. One lady died and her husband was obviously bereft. She died and one of her three daughters is still missing.”

He added: “This was followed by three others dying.These are just the four deaths we saw.

“There are other deaths taking place in various other points, which we don’t know about.

“There was no shooting involved. It’s just the sudden crushes, combined with the fierce heat and the sense of panic, which go over the crowd like waves.”

Lt Col Justin Baker, of 16 Air Assault Brigade, said: “It is the operating environment here which is so complex.

“We are facing challenges that nobody has experiences for but I have been really impressed by how agile and adaptable the whole force has been and how well they have coped with those challenges.”

His colleague Major Rob Scharick, insisted that the Army, which has now helped 4,000 people fly to safety, had “done the best we possibly can do”.

He added: “We are trained to deploy at short notice to complex environments and to tackle a range of functions from war fighting to something like this ‑ a non-combatant evacuation operation.

“I am amazed with how the guys have dealt with the challenges of doing it.”

An MoD spokesman said: “Our sincere thoughts are with the families of the seven Afghan civilians who have sadly died in crowds in Kabul.

“Conditions on the ground remain extremely challenging but we are doing everything we can to manage the situation as safely and securely as possible.”

A Nato official said the death toll around the airport, where visas for exit flights are being processed, had risen to at least 20 in the past week. They added: “The crisis outside Kabul airport is unfortunate.

“Our focus is to evacuate all foreigners as soon as we can. Our forces are maintaining strict distance from outer areas of Kabul airport to prevent any clashes with the Taliban.”

Yesterday, gunmen from the militant group ordered the queuing families into long lines and there were no further reports of fatalities. One of the group’s commanders said they were “seeking complete clarity on foreign forces’ exit plan”.

He added: “Managing chaos outside Kabul airport is a complex task.”

Another, Amir Khan Mutaqi, accused the West of trying “to create panic and chaos” and an “evacuation drama”.

The Taliban also insisted yesterday that schools and colleges can open again, claiming they planned to meet former governors in more than 20 of the country’s 34 provinces.

Former Chief of the General Staff Lord Dannatt welcomed the promise, but urged caution until the schools were seen to open.

Organisers of #DigitalDunkirk said the Afghanistan crisis was like the emergency faced by Allied forces in 1940.

Around 850 civilian boats sailed across the English Channel to help rescue more than 300,000 troops trapped by the Nazis on the beaches of northern France.

Jen Wilson, 35, chief operating officer of Army Week Association in New York, said the hashtag is meant to unite the thousands trying to escape from Afghanistan.

It will offer help and advice on the evacuation ofWestern allies and their families, such as interpreters or military personnel.

She said: “Dunkirk was every Tom, Dick and Harry with a boat… they all flooded the waters to get these guys out.

“That’s exactly what it is here…we have former Navy Seals going in with their own money…down to me as a civilian sitting in my apartment in New York.

“It’s all hands on deck…I just got a contact this morning who works with a guy whose brother’s an Apache [helicopter] pilot on the ground.”

The US has enlisted commercial planes to help with the evacuation of people from Afghanistan.

A Pentagon statement said the 18 aircraft would not fly to Kabul but would help move refugees from transit countries.