BBC Weather: UK set for snow as temperatures plummet to -10

A three-day snow bonanza is due to start in the UK as February continues with the bitter winter weather seen throughout January. The mercury is forecast to plunge this week, causing snow and freezing cold rain in parts of the country according to the Met Office.

The UK is currently covered in a barrage of yellow weather warnings from the Met Office – with four warnings out for today alone.

All four warnings are for snow and ice and cover Northern Ireland, most of Scotland, as well as north Wales and the north of England.

Some 15 inches (40cm) of snow could fall in some areas, bringing major travel disruption.

The warning reads: “A band of rain, locally heavy in places, is likely to push slowly northeast across parts of the UK. 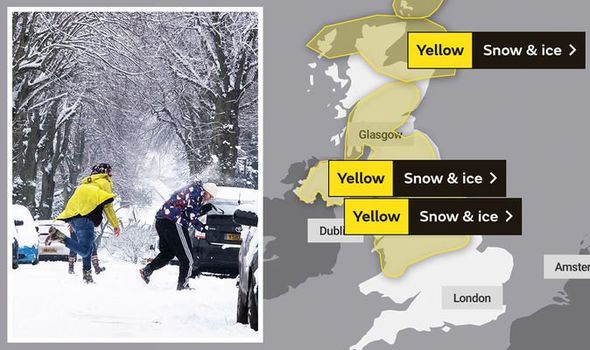 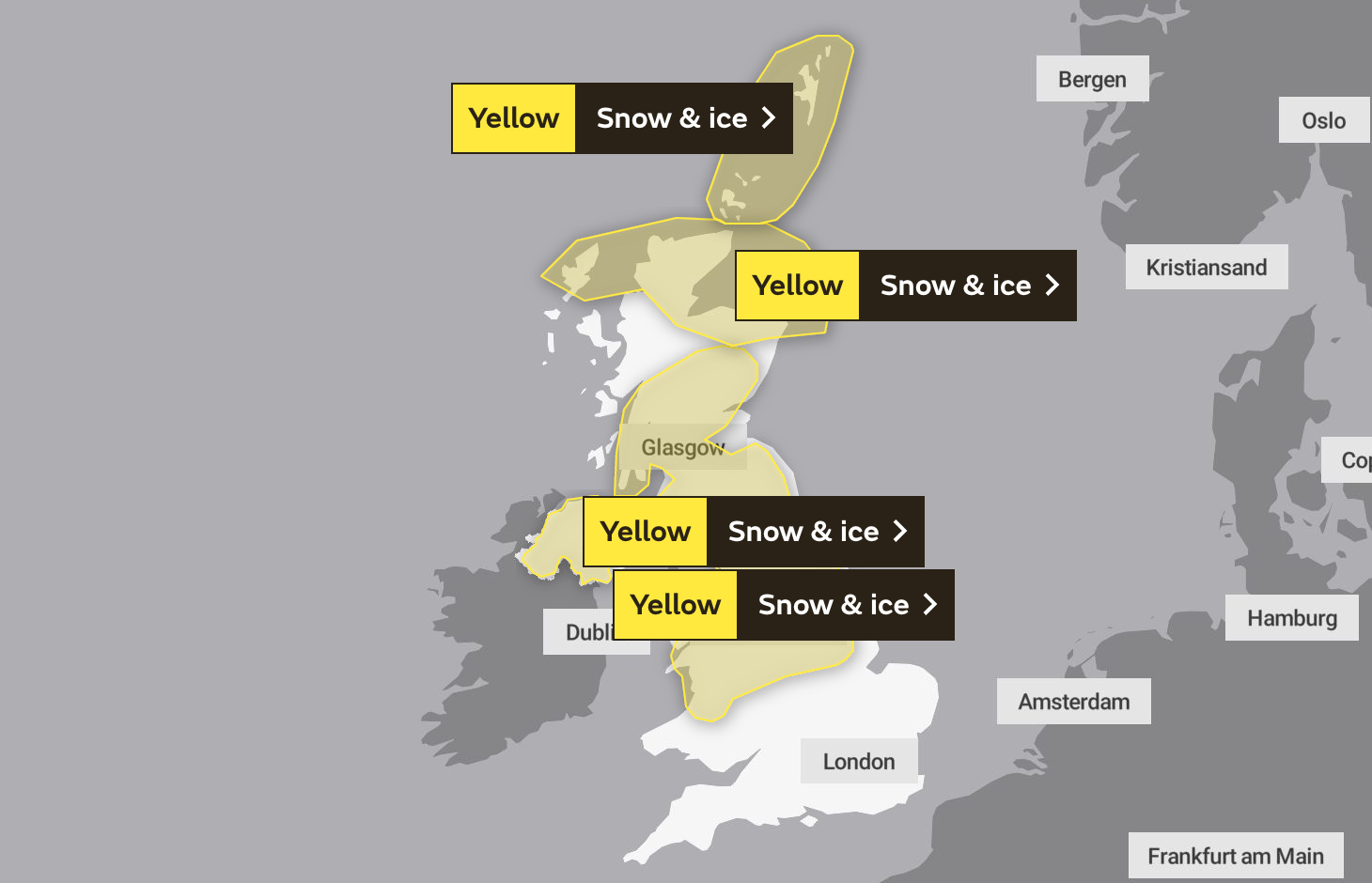 “As this rain comes into contact with cold air in place, it is likely to readily turn to snow away from eastern coastal districts.

“One to 4cm of snow is quite likely away from eastern coasts, with 5 to 10cm possible in places, most likely across southern Scotland and above 150 m over northern England.

“Potential for 20cm or more across higher parts of northern England and Scotland.

“As well as snow, a period of freezing rain is possible for parts of east Wales and the north Midlands. Should this occur widespread icy stretches would form. 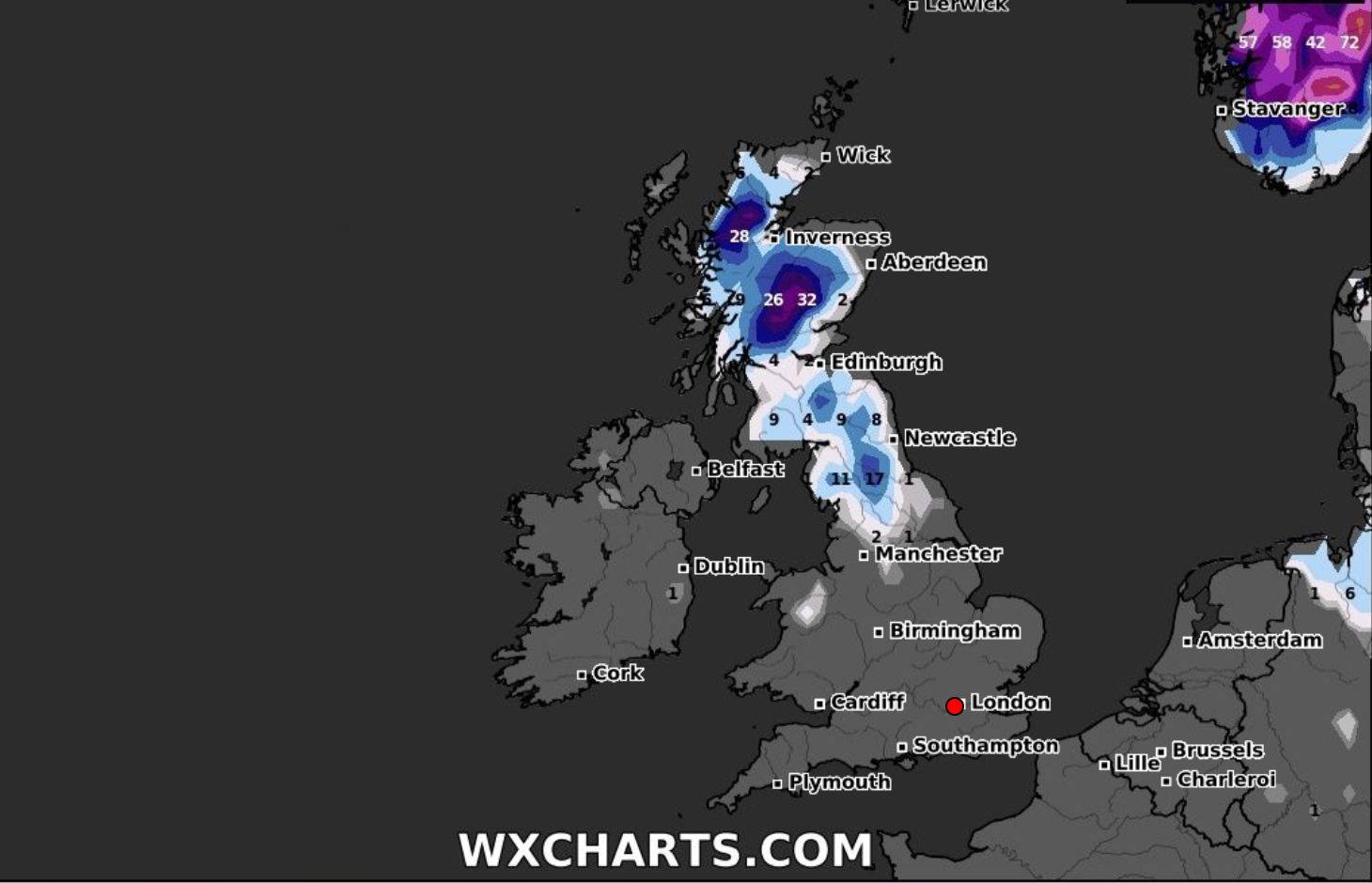 “Snow should turn back to rain from the south, lasting longest across parts of northern England and Scotland.”

These warnings are in place from 10pm on Monday, with most lasting throughout a considerable chunk of Tuesday.

Warnings are out for Tuesday and Wednesday as well, but the threat of snow gets less as the week goes on, with warnings reduced to a smaller number of areas.

However, Scotland could see the highest levels of snow on Wednesday.

A yellow alert in place from 12am to 11.59pm on Wednesday reads: “Further spells of snow, heavy at times, will continue to affect parts of northern England and Scotland during Wednesday.

“Snow is most likely to fall on higher ground, mainly above 200 to 300 metres.

“Significant accumulations of 10 to 20 cm are possible, perhaps as much as 40 cm across the Grampians.

“This amount of snow could bring disruption to travel across trans-Pennines routes and the higher roads across the Southern Uplands and Grampians.” 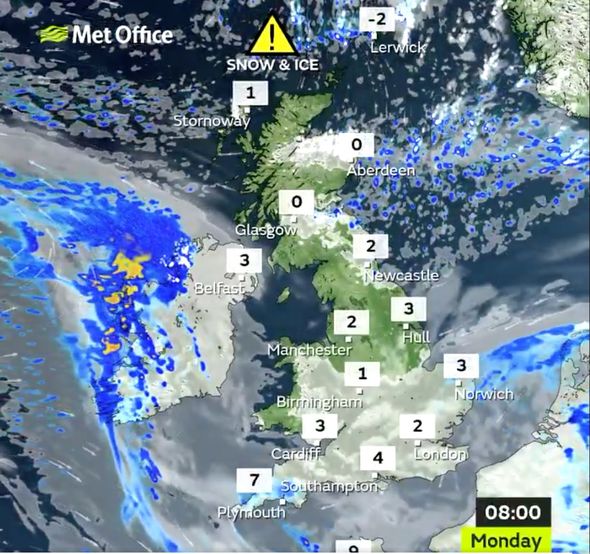 Where will it snow this week?

Up to 5cm of snow is expected at lower levels, with 20cm likely to land in higher elevated parts of the north and Scotland.

The north of England, including the Yorkshire Dales and the Lake District, are both likely to be hit by 20cm of snow.

According to the latest maps, other areas not covered by current weather warnings will also see a sprinkling of snow, including London and Kent.

Met Office Meteorologist Luke Miall said: “From Monday night into Tuesday, we’ve got a weather system coming up from the Atlantic, bringing heavy rain to southern and western parts of the UK.

“As it bumps into that cold air for Northern Ireland, Scotland, northern England, and perhaps north Wales, these are the areas that are likely to see that rain turning quickly to snow.”

With the northern parts of the UK most likely to be hit, travel is expected to be disrupted, including trans-Pennine routes and the M4 corridor.

The freezing temperatures are thanks to a dense pool of cold air coming over from Scandinavia, with northeasterly winds making Britain particularly cold currently.