Home » World News » Snow radar LIVE: Where will it snow in the UK this week? Snow risk levels MAPPED

Maps show the UK is currently split down the middle, with the east of the UK blanketed in snow and the west relatively free of the stuff. Northern Ireland is also coated with snow, and much of Scotland has been frozen over for the past week. It brought some of the coldest temperatures ever recorded in the UK, with temperatures reaching minus double figures in some parts of Scotland.

The coldest UK temperature for 25 years was recorded at Braemar in Aberdeenshire on Wednesday night when the mercury fell to -23C.

Luckily, temperatures are set to increase in the coming days, with highs of 13C expected across England, causing much of the remaining snow to melt.

But some areas will continue to see snow conditions this week.

Scotland will be stuck with the snow and cold for a little longer, as temperatures remain bitter. 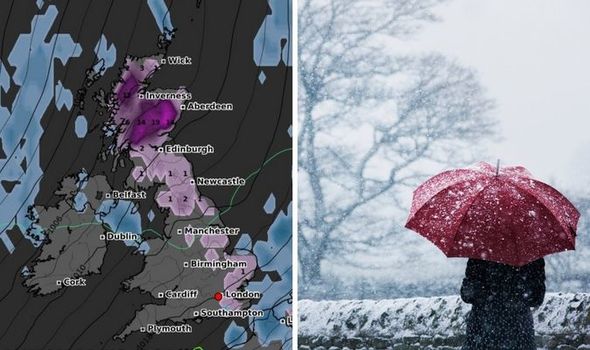 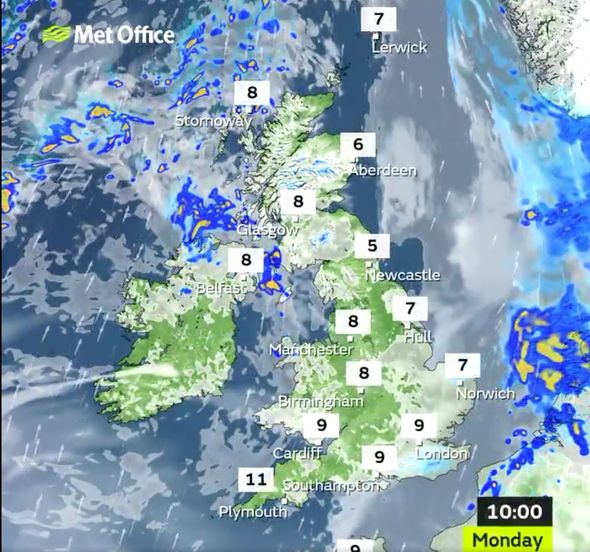 Where will it snow this week?

With the recent cold spell expected to ease up over the course of this week, snow will become more sparse and fresh snowfall even more unlikely across most areas.

However, according to Met Office meteorologist Neil Armstrong, there could be more snow coming for Northern Ireland.

He said: “For the past week the UK has been in a very cold air mass with temperatures well below average, this will change through the weekend as milder air moves in from the Atlantic and pushes that cold air mass out into the North Sea. 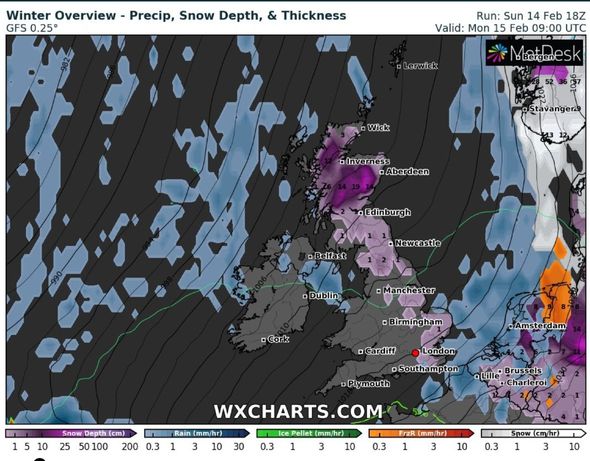 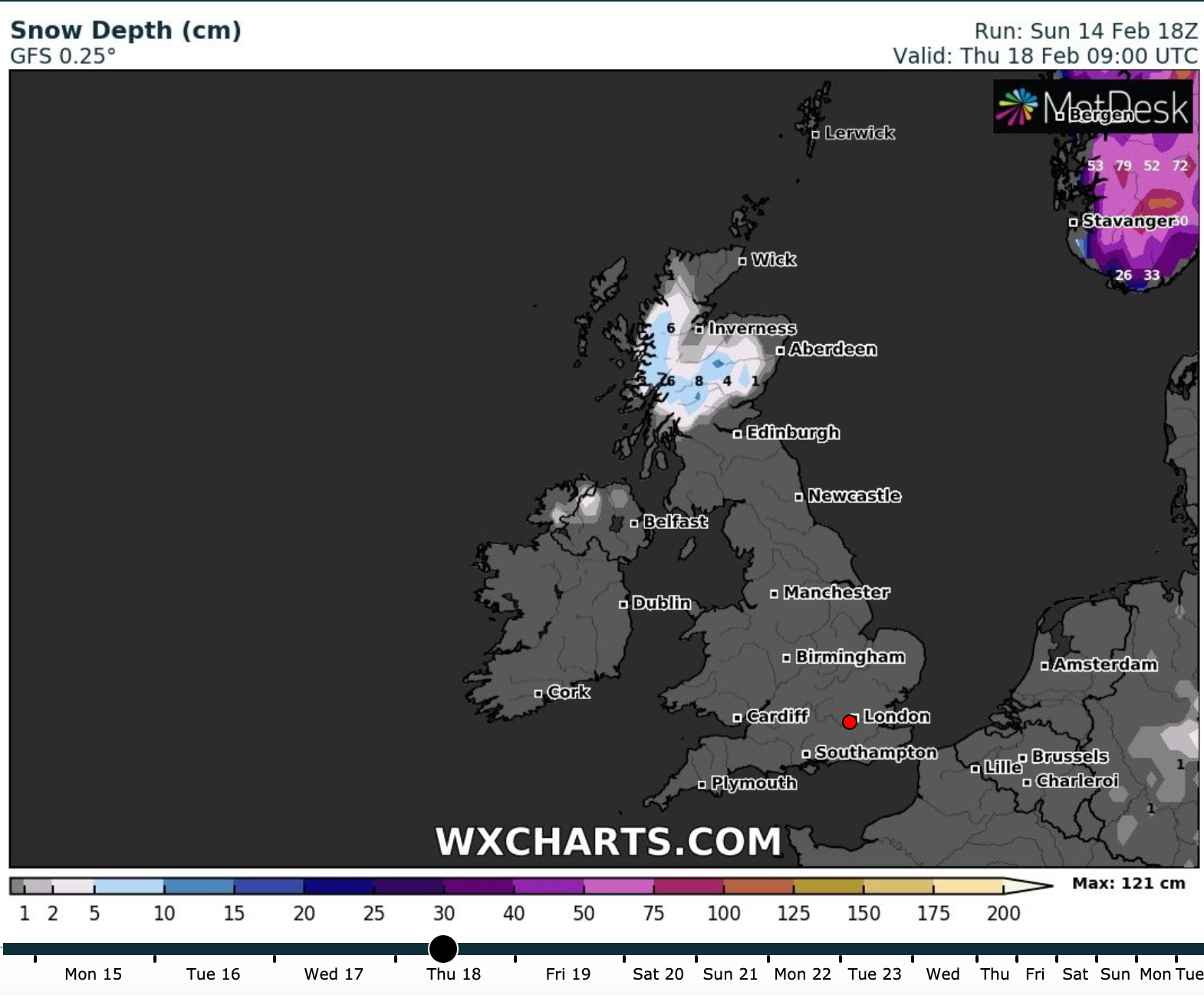 “Where temperatures were close to freezing in many places last week, we could expect to see 11C or 12C next week.”

He also warned “there are still some wintry hazards to get through over the next few days, with low temperatures, strong winds and further snow especially in Northern Ireland.

Maps from WXcharts show the snow clearing up throughout the course of the week, with much of the remnants cleared by the end of Tuesday in England.

Snow will remain in Scotland throughout the week, but will disappear from the central belt and remain in the highlands and Aberdeenshire.

The BBC’s monthly forecast signals there will be a warmer spell coming, but a cold front could come from Scandinavia to send temperatures plummeting again sooner rather than later.

The outlook reads: “For the final week of February, high pressure is expected to continue to be the main driver in the weather pattern across Europe.

“However, there is some uncertainty on where exactly it will end up. As the high shifts through north-east and eastern Europe, this will tend to keep things colder and drier than normal for us in the UK.

“The main issue is that if the high-pressure centre is too far east, low pressure will be able to creep in from the southwest, bringing mild and wet weather. 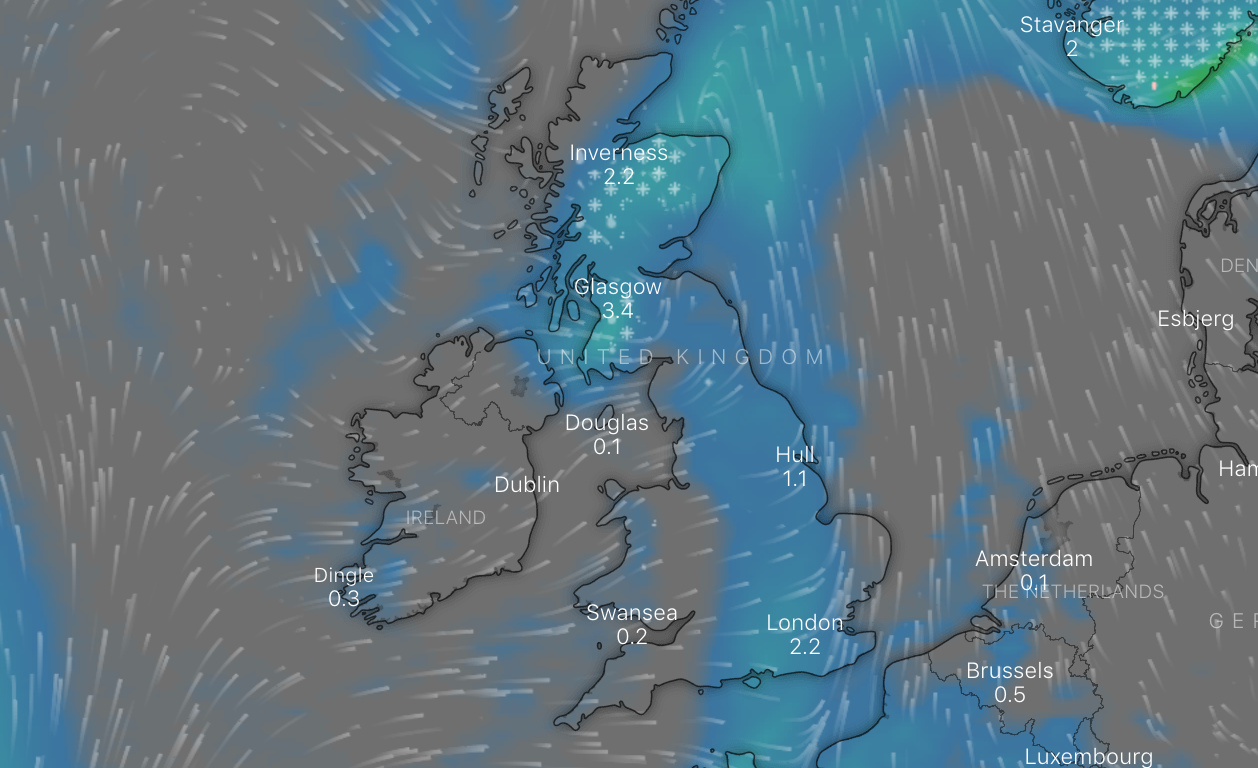 “There are three possible scenarios we think could play out.

“The first is that high pressure is nearby in Scandinavia and keeps things drier and colder than normal with winds mainly from the continent out of the east or south-east.

“The second is for high pressure to still be north-east or east, but too far away to influence us.

“This would be similar to the coming week in mid-February, with milder, wetter weather throughout the UK.

“The final pattern is that we end up in a battleground between the colder and milder air, with western areas noticeably warmer and wetter than the dry, cold conditions in the east.”