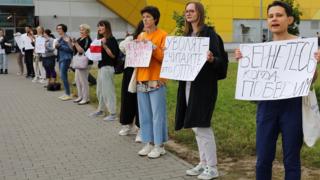 Belarus opposition leader Svetlana Tikhanovskaya has urged her supporters to step up their strikes despite “intimidation” from the authorities, as prosecutors question her allies.

In a new video address from exile in neighbouring Lithuania, she said: “I ask you, continue and expand strikes… don’t be fooled by intimidation.”

She says the 9 August election was “stolen” by President Alexander Lukashenko and must be re-run fairly.

Many workers have gone on strike.

However, President Lukashenko shows no sign of backing down and activists report pressure on staff at state-run enterprises not to join the strikes.

In her latest message, Ms Tikhanovskaya said: “It’s time to unite… you have intimidated the dictatorship.

“It trembles with fear of you, your strength and courage. That is why today you are feeling tremendous pressure.”

Allies of Ms Tikhanovskaya on the new opposition Co-ordination Council have been summoned to the Belarus Investigative Committee (SK), as they are now accused of an illegal power grab.

The BBC’s Will Vernon in Minsk reports that a lawyer for the council, Maxim Znak, arrived for questioning on Friday, and Sergei Dylevsky, organiser of strikes at the Minsk Tractor Factory, is also to be questioned.

The council, which also includes prominent Belarusian cultural figures, was launched to organise a peaceful transition and pave the way for a re-run of the election.

But on Thursday the chief prosecutor launched a criminal case against the council, calling it unconstitutional. President Lukashenko has called some of the protesters “Nazis”.

Maxim Znak told the BBC he was concerned he could be arrested on Friday.

Traditionally loyal factory workers at state enterprises joined the strike action, in an unprecedented show of defiance towards Mr Lukashenko.

But reports say the number of strikers has fallen because of the official pressure on them. For example, those who walked out of state TV were told they would not get their jobs back.

Police intervened in a demonstration outside the Minsk Tractor Factory, arresting protesters.

Police also blocked the entrance to the National Academy Theatre in Minsk after staff resigned en masse over the forced removal of director and former culture minister, Pavel Latushko, who publicly called for new elections.

Ms Tikhanovskaya has appealed to European leaders to help establish a dialogue with the authorities. The EU has already announced sanctions against Mr Lukashenko. The nation of 9.5 million has long had frosty relations with the EU.

The Belarus president has been in power for 26 years, and remains an ally of Russian President Vladimir Putin, though he has resisted Russian pressure for deeper integration.

On Thursday, President Putin discussed the Belarus crisis with European Council President Charles Michel by phone. The Kremlin says Mr Putin “emphasised that any pressure on the leadership of the sovereign Belarusian state and any outside interference in the internal processes taking place there would be counterproductive”.

Mr Lukashenko’s victory has been rejected by major international powers.

Much of Belarus’s opposition is already in jail or, in the case of presidential candidate Svetlana Tikhanovskaya, in exile out of the country.

So the opening of this criminal case could pave the way for the arrest of many of those who remained. Appointed by Ms Tikhanovskaya, the Co-ordination Council members are a mix of artists, civil society figures, journalists and business people.

Thoughts here in Minsk have already started to turn towards the weekend. Last Sunday a huge demonstration of several hundred thousand people galvanised the opposition. Another Sunday rally is planned and it appears that President Lukashenko is determined to avoid a repeat.

After a period in which the Omon riot police largely withdrew from view, they have now been ordered back on the streets.

The thuggery of the first few days after the election hasn’t returned but understandably people are cautious. The heady optimism of just a few days ago has quickly receded.