Teenager accused of stabbing in gang brawl in tourist hotspot 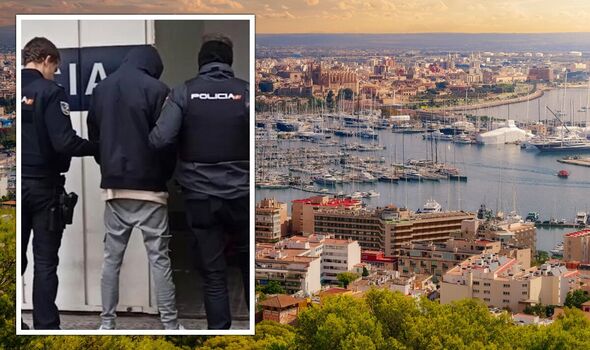 Three people have been arrested and a 13-year-old boy accused of stabbing a 16-year-old after a brawl broke out in a major Spanish tourist hotspot. A fight broke out between groups of youngsters in Plaza de España, the city centre of Palma de Mallorca, the capital of Majorca – home to popular holiday destination Magaluf – during which one was stabbed, local media has reported.

A 13-year-old has been referred to the Juvenile Prosecutor’s Office, and is now being held in a protection centre, as he is too young to be charged. Local police have arrested three other boys, between the ages of 15 and 22 , for their involvement in the brawl and have identified a dozen more.

The fight between rival gangs started after one of them threw firecrackers at the other on January 2 in Palma.

When a 16-year-old from the other group protested against the firecrackers, they were attacked, with the gang taking chairs from the terrace of a nearby fast-food restaurant and throwing them at the youths, before kicking and punching them.

One of the attackers then reportedly took out a knife he had hidden up his sleeve. The 16-year-old was stabbed in the stomach during the ensuing brawl, and the emergency services were called.

Police rushed to the scene, but the perpetrators fled and were unable to be captured. A wounded teenager was taken to a hospital, where his wounds were stitched.

According to the Diario de Mallorca outlet, the defendants are part of a criminal gang that has squatted in several premises in the vicinity of the Palma Local Police headquarters.

The agents of the central district police station opened an investigation, have identified around fifteen people involved in the riot. Investigations concluded last Thursday, January 19, and three people have been arrested for the attack – a 22-year-old Spaniard, a 19-year-old Brazilian and a 15-year-old.

Officers also accused a 13-year-old of instigating the stabbing.

The defendants, according to local media, were arrested in two disused premises located on Indústria and Joan Crespí streets, where they had settled as squatters. The National Police is still attempting to locate and arrest the rest of those involved.

Express.co.uk reported last year that Palma de Mallorca was the third most dangerous city in Spain after Bilbao and Barcelona, according to analysis by Numbeo.

Following the report, Silvia Fuentes, chief inspector of the National Police’s robberies squad in Palma, insisted the city was safe and placing the blame for crime on tourists, saying: “Palma has never been an excessively challenging city. We are an island and the entrance and exit of thieves is quite controlled. When we come across a wave of unusual thefts, the perpetrators are foreigners. On the island itself, the police know who the thieves are, and they know the police. This, without any doubt, helps us solve many cases.”

The UK Government advised: “Thieves often work in teams of two or more people and tend to target money and passports. Don’t carry all your valuables in one place, and remember to keep a photocopy or scanned copy of your passport somewhere safe.”

The Government also advises that personal attacks and sexual assualts are rare but can occur and are often carried out by other British nationals.

It said: “Buy your own drinks and keep sight of them at all times to make sure they aren’t spiked.”