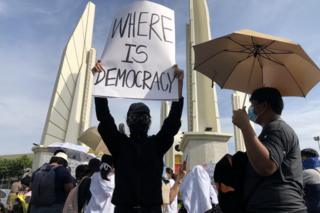 Thousands of protesters staged another anti-government rally in the Thai capital, Bangkok, on Sunday to demand political reforms.

Demonstrators want a revised constitution and are also calling for reform of the monarchy – a sensitive subject in Thailand.

There have been almost daily student-led demonstrations in recent weeks.

Several protest leaders have been arrested.

But organisers said they hoped Sunday’s rally would show broader support for change beyond the student groups.

“We are here from all different groups, all different ages,” said one protester, a 29-year-old student who only gave their name as Kukkik.

Observers said Sunday’s protest at Bangkok’s Democracy Monument was one of the biggest anti-government demonstrations since Prime Minister Prayuth Chan-ocha took power in a 2014 coup.

They waved banners and chanted: “Down with dictatorship, long live democracy.”

The protesters are demanding that Mr Prayuth – a former general who won disputed elections last year – stand down.

The BBC’s Jonathan Head in Bangkok says recent inclusion of the monarchy in the protesters’ demands has electrified the debate.

About 600 police officers were monitoring the protest.

Nearby, dozens of supporters of the monarchy also staged a rally.

Last year’s elections were the first since the military seized power in 2014 and for many young people they were seen as an opportunity for change.

But the military had taken steps to entrench its political role, and the election saw Mr Prayuth re-installed.

Mr Prayuth says the majority of Thais do not support the protesters.

The latest wave of protests began in February after the pro-democracy Future Forward Party (FFP) was dissolved by court order.

Protests were held, but were quickly halted by Covid-19 restrictions.

Tensions increased in June when Wanchalearm Satsaksit, a prominent activist who had been living in Cambodia in exile since 2014, went missing. The Thai government has denied any involvement in his disappearance.

Student-led protests erupted again on 18 July, despite a ban of mass gatherings under the country’s state of emergency. Rallies have been held almost daily since then.

Last week, prominent student leader Parit Chiwarak, 22, was arrested and faces charges including sedition, assault and holding an event that could spread a disease.