Thailand’s roads are some of the most dangerous in the world. Every year around 20,000 people die in fatal crashes.

Around three quarters of all deaths are people on two- or three-wheeled vehicles.

Sompong Chanraksa, 60, began collecting used motorcycle helmets almost 50 years ago. He currently has a collection of more than 700 taken from crash sites where their previous owners were often killed or injured. He spoke to Sky’s Southeast Asia Correspondent Siobhan Robbins. When you walk in the drive, in front of a small shrine is a motorbike which at first glance appears to be carrying an adult and child. 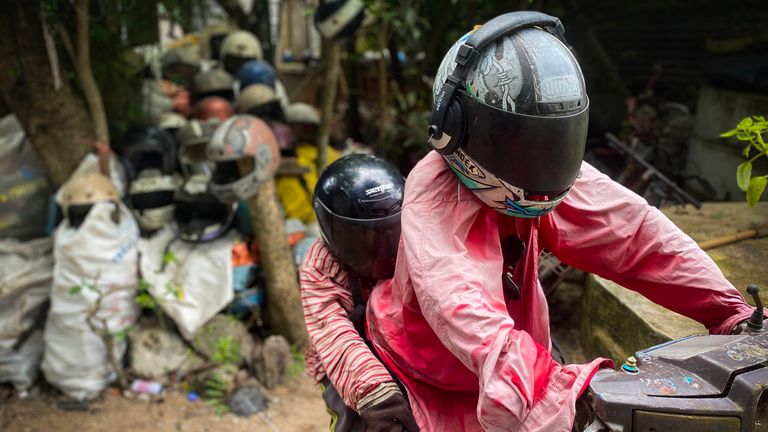 Behind the bike is a mound of helmets piled one on top of each other, faintly reminiscent of a pile of skulls you may see on the set of Hollywood adventure film.

Further in and the collection expands, lining the perimeter walls, overflowing from shelves, hanging from trees, peeping from the undergrowth.

“I made these mannequins to remind people to put helmets on before leaving home for their own safety,” Sompong explains as he begins his tour.

“Sometimes they put their helmets in their front baskets. They feel that they don’t look good… So I use these helmets to remind people when you go to the market, wear a helmet.” 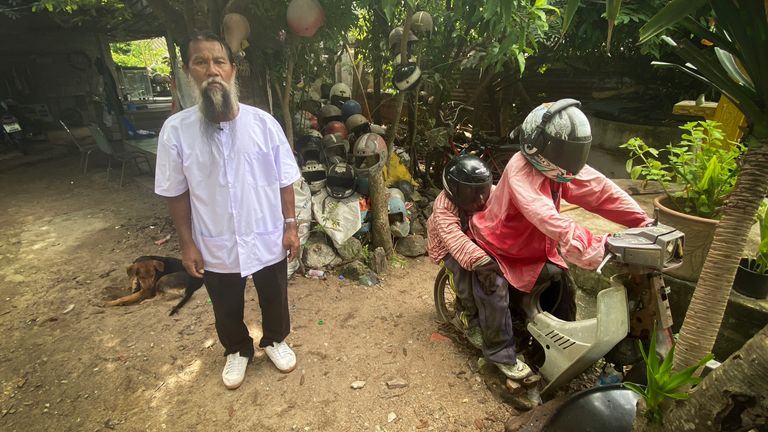 “These two helmets are decades old. With this helmet, a motorcycle crashed with a bus. The person died suddenly,” he says, picking up a faded piece from a carefully organised display.

“It was drizzling and I was eating before I went to work. I heard the bang and went out to see. Two people died… The accident responders didn’t collect helmets at that time, so I brought it back home from the accident site.” 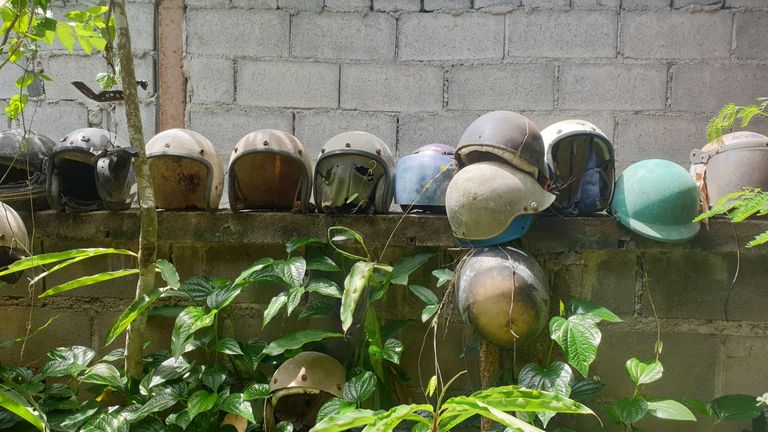 Around the corner, the whole boundary wall is topped with helmets, each one has a story which he remembers, regardless of how old they are.

“In this area, all the helmets come from dead people,” he continues. “These people were motorcyclists who died in accidents and they put their helmets in the baskets of their motorcycles.

“This one is from a very serious accident as only half of it is left. This helmet’s owner died at the site.”

As we walk further in, I see a wide-eyed plastic doll hanging in the flower bed. Its blonde hair and body have been bleached white by the sun. 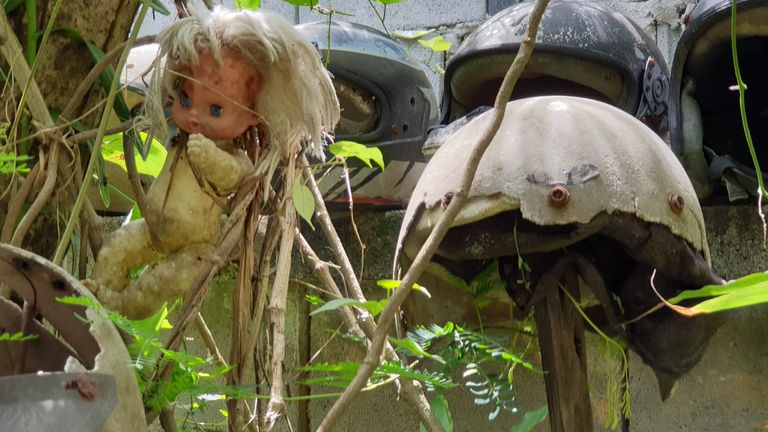 “This helmet and the doll belong to a child,” Sompong explains. “She and one of her parents died in hospital but I don’t know their names.

“I collected them on a road to Pattaya and found the doll together with the helmet so I kept them both as I didn’t want to leave anything behind.”

And so it goes on, cracked helmets, helmets which are almost completely destroyed, others which look untouched, as well as hubcaps and other bits of wreckage claimed from crash sites. “They are down there too, covered with roots,” he says, pointing to a group which plants have grown through, tethering them to the property.

“Here they are on the house walls, vines cover them. I haven’t cleared them out because it’s rainy season.”

At several points on the tour he stops and puts some of the helmets on.

“These were from normal accidents, mostly the drivers got broken arms, they were not fatal. There are signs of the accidents here,” he says pointing to scuffs and scratches. “I normally wear these helmets, wearing them like this,” he adds, pulling one over his head. “Sometimes, I don’t have a helmet so I wear these to go out to the market.”

I ask if he ever wears dead people’s helmets?

“I’ve worn them many times,” he replies. “Sometimes, I don’t clean the marks off the helmets from accidents, I just wear them to go to the market. Sometimes, people ask me ‘Uncle, what’s that stain?’ I just tell them that it’s paint.” For Sompong, the collection is a physical safety reminder for his community, but the morbid collection has sparked rumours the house is haunted.

He says children scared by the mannequins in the drive have crashed their bicycles into the ditch outside. Adults who borrowed the helmets quickly returned them, complaining that they couldn’t sleep and felt like they were being followed.

“Some people came to my house late at night and asked if I was holding a house party. I said no, there are only 3 to 4 people in our family. They didn’t believe me as they [said they] saw so many people.” 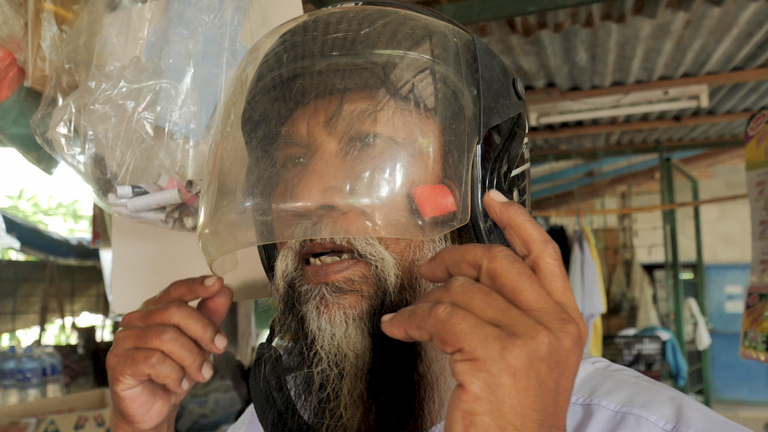 “I don’t feel scared. My only feeling is wanting to help them [the victims]. Leaving their helmets on the side of the road doesn’t look pleasant so I thought I should help them by keeping the helmets at home to look nice.

“When I make merit or give alms, I dedicate the merit to the dead and the owners of helmets which I collected.”

We watch as he prays for the dead at a shrine in his garden, lighting incense and making merit to help them cross safely to the next rebirth, as is Buddhist tradition. “Some people could perceive that it’s disrespectful to the dead. But in fact, I don’t think so. I collect the helmets and they are displayed as a reminder. I also asked for permission [to collect them]. I make merit for them every day.”

Inside the house he shows us three of the newest additions to his collection, each carefully wrapped in a plastic bag “to collect their scent”.

He says they will stay like this for six months to a year before he puts them outside with the rest. This process is his way of keeping the memories of the previous owners alive. “The smells of the people who had accidents are kept in their helmets so when we open them we can remember this smell belongs to this person.”

While the collection has frightened some people and inspired ghost stories, Sompong says it has also prompted many of his neighbours to take road safety more seriously.

It’s a stark, physical reminder of the fact that the majority of people killed on Thailand’s roads are motorbike riders.

“Many of the people who’ve come to my house have said it’s good to see helmets like this. If they don’t wear their helmets, I might be the one who goes to collect [them],” he says.