The Secret to Great Thanksgiving Turkey Is Already in Your Fridge

A mayonnaise-based marinade gives this bird from J. Kenji López-Alt its gorgeous finish. Spatchcocking and a simple brining technique get it evenly cooked and juicy.

Thanksgiving has long been my favorite holiday, but, as someone who creates recipes for a living, it has one drawback: having to come up with new ways to tackle the same bird, year after year.

Back in 2009, during my time as culinary director at Serious Eats, I landed on a turkey roasting method that hinged on two killer techniques: dry-brining and spatchcocking (a.k.a. butterflying), which each help produce moist, juicy white meat and succulent, flavorful dark meat in a nearly foolproof manner.

As it happens, the thermodynamics of roasting and the physiology of turkeys remain pretty consistent year to year, which means that, in 2022, dry-brining and spatchcocking are still invaluable. So this year, I thought I’d briefly explain the difficulties of roasting turkey and how dry-brining and spatchcocking help solve these issues, as well as offer an alternative to spatchcocking if it seems too intimidating and a technique that will help improve the flavor, color and crispness of the turkey skin. It involves a good amount of mayonnaise. (I can already sense mayo-averse readers closing the browser window or flipping the newspaper page, but I implore you to give it a chance!)

What makes roasting turkey especially difficult? It comes down to the difference between light meat and dark meat. Dark meat, with its abundance of connective tissue, needs to be cooked hot and long enough so that tough, elastic collagen breaks down into gelatin, which tenderizes and moistens the meat. This happens around 170 to 180 degrees Fahrenheit. Lean breast meat, on the other hand, dries out and turns tough and stringy when cooked past 160 degrees or so. (I prefer my white meat to be cooked to no hotter than 150 degrees.) 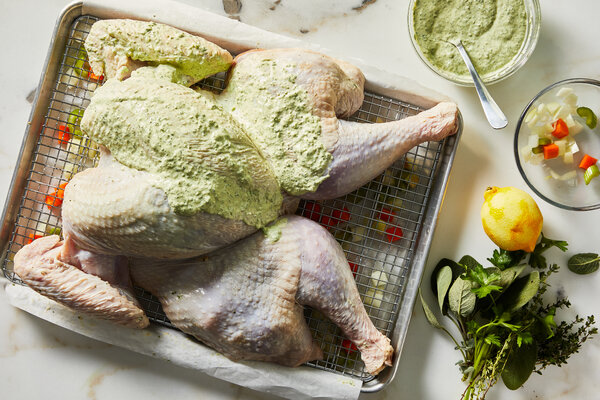 This means you need to either figure out a way to roast one bird to two different temperatures or alter how the muscles and connective tissue react to heat. I recommend tackling these approaches simultaneously.

Let’s start with altering muscle structure. Years ago, when I was a restaurant cook, brining was the method we’d use. My fellow cooks and I would put turkeys into large buckets, then cover them in a salty brine — 50 grams of salt per kilogram of water for a brine strength of about 5 percent. The birds would sit in buckets in the big walk-in refrigerator for two nights, then we’d take them out, pat them dry and roast them. With this brining process and careful monitoring of temperature, even the lean breast meat of heritage-breed turkeys (which tend to be tougher and leaner than your standard supermarket bird) would come out juicy as can be.

But how does a brine work? What are the physics behind it?

It wasn’t until several years later, when I worked at America’s Test Kitchen, that I got a better explanation from Guy Crosby, an adjunct associate professor at Harvard University and now the science adviser to Milk Street Kitchen.

First, let’s get a rough idea of the structure of muscles. Muscle cells are long and elastic and come bound together in protein sheaths called fibrils. These fibrils are arranged lengthwise into bundles — like the filaments in a fiber-optic cable — which give meat its distinctive grain. As meat heats up, the proteins that surround these bundles change shape and contract, causing those bundles to squeeze tighter and tighter, eventually forcing out juices. Just like toothpaste out of a tube, once the juices are squeezed out, there is no way to get them back in. This is why overcooked meat ends up dry, even when cooked in a moist environment.

The salt in a brine dissolves some of the proteins in those bundles. A weaker protein structure means less squeezing, which leads to juicier cooked meat. Moreover, because a salty brine works its way from the outside in, its greatest effects will be on the outermost layers of muscle fibers, the areas most prone to overcooking.

While the advantages of soaking a turkey in a liquid brine are obvious, especially in lean breast meat, there are some disadvantages. The first is space. In a restaurant kitchen with a walk-in refrigerator, space isn’t an issue, but at home, finding a vessel that can fit a whole turkey and keep refrigerator-cold for a couple of nights is not as easy. I used to resort to brining turkey inside a cooler, which I’d keep chilled with ice packs that I’d change out every six to eight hours. (Ice packs were necessary because using plain ice would end up diluting the brine as it melted.)

The second disadvantage is that liquid brine can dilute the turkey flavor. A brined turkey may taste juicier, but it also tastes watered down, as there is an inevitable exchange of liquid between the turkey and the brine during its extended soak.

The solution? Ditch the solution. These days, I use a salting method known as “dry-brining,” which I learned from the chef Judy Rodgers’s recipe for the roast chicken she served at Zuni Café in San Francisco. All you have to do is salt your turkey inside and out with coarse salt (it works best if you get some of the salt between the meat and skin on the breast, but even salting over the skin will help), place it uncovered on a rack in the fridge, and let it rest for a day or two. Initially, the salt will draw out liquid from the turkey — you’ll see it start to bead up on the surface within minutes. The salt then dissolves in this liquid, creating a super-concentrated brine that will then start to work its way back into the bird, dissolving muscle proteins as it goes.

In testing I did for my Food Lab column at Serious Eats, I found that dry-brined poultry as well as traditionally brined birds retain about 35 percent more moisture than unbrined poultry. But one advantage of dry-brining is that the turkey’s flavor remains undiluted by excess water.

While brining is key, temperature management is even more so. The goal is to get the dark leg meat to cook faster than the lean breast meat. The traditional method of roasting a turkey — placing it on a rack in a deep roasting pan — accomplishes the exact opposite. A deep roasting pan reduces the flow of hot air around the thighs and back of the turkey, while the breast meat remains elevated above the rack, speeding up its cooking. By the time the leg meat has reached the requisite 170 to 180 degrees, the breast meat is hopelessly overcooked.

Butterflying the turkey and roasting it on a wire cooling rack set in a rimmed sheet pan solves all of these issues. By cutting out the turkey’s backbone (save it to fortify your gravy) and spreading its legs outward until they lie flat, the leg sections end up thinner than the breast section, allowing them to cook faster. Moreover, because heat penetrates a spatchcock turkey faster than a whole turkey, it can be roasted at a higher temperature for a shorter amount of time. A 10- to 12-pound bird takes only 80 to 90 minutes to roast in a hot oven, freeing up that valuable oven real estate for your Thanksgiving side dishes.

(Spatchcocking works best for birds in the 10- to 14-pound range. For birds larger than that, you may have to completely separate the legs from the body in order to Tetris them onto the sheet pan.)

When roasting a spatchcock turkey, I recommend adding a layer of coarsely chopped vegetables — the standard onions, carrots and celery work, but garlic, fennel or ginger can also be great additions — underneath the rack. This not only contributes flavor to the pan drippings (which you can use to add flavor to your gravy), but it also helps prevent those drippings from drying out and burning.

I typically carve my turkey in the kitchen and arrange it on a platter for serving, but spatchcocking may not appeal to those of you who like to present the whole bird and carve at the table. Don’t worry! A baking stone or baking steel can solve those problems. Start by heating a stone or steel in the oven while you arrange your whole turkey breast-side up on a wire rack set in a rimmed sheet tray. When the stone is sufficiently heated — I give it a full hour after turning on the oven — place the tray directly on top of the stone. The heat retained in the stone helps the underside of the turkey cook faster, keeping the dark meat in pace with the light meat as it roasts.

Finally, let’s talk about skin. The common technique of massaging a softened compound butter all over the turkey before roasting works all right, but it’s has a flaw: Butter melts at a relatively low temperature. This means that no matter how much butter you rub onto the turkey, the vast majority of it ends up dripping into the tray before the turkey has begun roasting.

A few years ago, I wrote an article in The Times about using mayonnaise as the base for marinades when grilling meat. Mayo offers a lot of advantages as a marinade, all of which translate well to roasted poultry. Most flavorful compounds found in aromatics — like garlic, sage, parsley, lemon zest and other turkey-friendly flavors — are fat-soluble; mayonnaise, with its oil base, helps spread that flavor around. Mayonnaise is soft but viscous straight out of the fridge or at room temperature, which makes it very easy to spread evenly on the turkey. Because mayonnaise is an emulsion bound with egg protein, it also tends to stay in place as it’s heated, which means that instead of flavor dripping into the roasting pan, it stays where it belongs: on the turkey. Finally, those egg proteins also aid in browning and crisping, producing a turkey with burnished, deeply browned skin.

By dry-brining, spatchcocking and using a mayonnaise marinade, the turkey should be the least of your worries this Thanksgiving (and unless the laws of physics change before 2023, you have next year covered as well).