Michael Kevane, an economics professor in San Jose, Calif., didn’t give a second thought to parking his 2005 Prius in his driveway one rainy evening last month. But the next morning, when his son Elliot went to start up the car, “it sounded like a jackhammer,” Mr. Kevane said. “The whole block could hear the noise.”

The reason for the ruckus: A thief in the night had made off with the car’s catalytic converter, a critical emissions-control device that contains trace amounts of precious metals more valuable than gold.

Two days later, Mr. Kevane’s sister, Jean, who lives in Los Angeles, had the catalytic converter stolen from her 2003 Honda Accord LX. “I thought, ‘This can’t be a coincidence,’” Mr. Kevane said.

Stricter car emissions rules around the world — particularly in China, which has scrambled in recent years to get its dire air pollution problem under control — have sent demand for the precious metals in catalytic converters surging. That has pushed up the asking price for some of the precious metals used in the device — like palladium and rhodium — to record highs.

The soaring prices may be accelerating the shift to electric cars, analysts said, noting that catalytic converters now make up a much larger proportion of a gasoline-powered vehicle’s cost than they did even just a year ago.

The metals prices, in turn, are fueling a black market in stolen catalytic converters, which can be sawed off from the belly of a car in minutes, and fetch several hundred dollars at a scrapyard, which then sells it to recyclers who extract the metals. These global trends in emissions regulations, metals markets and larceny appear to have converged that rainy night in Mr. Kevane’s driveway.

Nationwide, police are reporting a surge in cases.

In St. Louis, catalytic converter thefts jumped more than eightfold, from 50 in 2019 to to 420 last year, with the trend gaining speed near the end of the year into early 2021. In Lexington, S.C., sheriffs deputies responded to 144 catalytic converter thefts between July and December, nearly triple the number of cases over the year-earlier period.

Converter thefts in Wichita, Kan., also almost tripled in 2020 compared to the previous year, to 547 cases from 191, and the pace picked up in January, with 102 reported cases just that month. (Other police departments, including those in San Jose, N.M., and New York, said such detailed data was not available.)

“People are just trying to make ends meet. Then, all of a sudden, they have a thousand-dollar repair bill they didn’t expect,” said Sgt. Trevor McDonald of the Wichita Police. “We’ve also seen this increase at a time we’ve seen a lot of job loss in the U.S.,” he added. 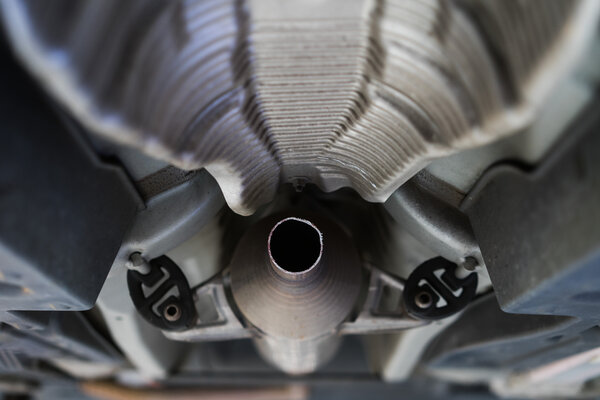 Catalytic converters, the shiny bulbous contraptions found between a car’s engine and the muffler, might seem like an unlikely target of a national crime wave. Required in all gasoline cars and trucks sold in the United States since 1975, the converters have a honeycomb-like interior — coated with precious metals like palladium, rhodium and platinum — that scrubs the worst toxic pollutants from the car’s exhaust.

The presence of those metals has always made catalytic converters a target, and incidents of theft — which can set owners back $2,000 in repairs — go back years. But a global trend toward stricter tailpipe emissions rules, as well as more rigorous enforcement after the Volkswagen emissions scandal, in which the automaker illicitly modified its vehicles’ pollution controls to seem cleaner than they really were, has led to a surge in demand for higher-performance catalytic converters and the valuable metals that make them work.

Rhodium, in particular, is effective in reducing levels of nitrous oxide from a gasoline car’s tailpipe emissions. And “we’ve had a very steep step-up” in nitrous oxide rules around the world, said Wilma Swarts, director of platinum group metals at the London-based precious metals research consulting firm Metals Focus.

About 80 percent of demand for palladium and rhodium now comes from the automotive sector. At the same time, the effects of the pandemic on mining in South Africa, a major producer of rhodium, has kept supply limited. “This is why you’ve seen this very dramatic rise” in demand and prices, she said.

For automakers, the metals boom has jacked up the cost of producing gasoline vehicles. Max Layton, a London-based commodity analyst at Citi, estimates that soaring metal prices added $18 billion to the global auto industry’s production costs in 2019, gobbling up 15 percent of their total cash flow, and that those costs surged further in 2020.

At current prices, he said, the industry as a whole was set to spend more than $40 billion this year just on metals for catalytic converters. The escalating costs, Mr. Layton said, were “putting pressure on automakers to shift to battery electric vehicles as quickly as possible.”

Some owners of gasoline vehicles are going to extremes to protect their vehicles.

After being hit with three converter thefts in quick succession last year, Jerry Turriff, proprietor of Jerry’s Certified Service and Towing in Milwaukee, has resorted to deflating the tires of some of his customers’ most at-risk vehicles to deter thieves from crawling underneath.

“It’s unbelievable,” Mr. Turriff said. “Now if I have a vehicle I think’s going to be targeted, I take the air out the tires, so they can’t slither underneath.”

He’s spotted the thieves on his security-camera footage — usually alone, entering his property in the dead of night, with “a big duffel bag carrying all his junk,” he said. (Stealing the converters can be treacherous for the thieves, too. Last year, a Kansas City man died after the Prius he was stealing the converter from crushed him to death.)

The last vehicle targeted, in November, was a Toyota Tundra pickup truck. Mr. Turriff replaced the stolen part, but the owner had the part stolen again several weeks later, he said.

Some states have started to require scrapyards and other recyclers to check photo IDs before buying used catalytic converters. California even requires businesses to take a photograph or video clip of the seller, and retain those records for two years. But different rules between states makes tracking and enforcement almost impossible, law enforcement officials says.

Online, ads abound of scrapyards willing to pay quick cash for catalytic converters. One site advertised payouts of up to $500 for certain foreign models. Older foreign models tend to contain more of the precious metals than newer ones.

Toyota Prius converters also fetch a higher price because their gasoline engines aren’t in as much use, and so it can take longer for the car to burn out the precious metals.

Some Toyota owners, in fact, are demanding that the automaker add anti-theft protections like metal shields to converters to make stealing them more difficult. Toyota did not respond to questions regarding thefts targeting the Prius.

Many buyers accept old catalytic converters by mail, with free shipping. And YouTube tutorials are available for would-be sellers.

J. C. Fontanive, a sculptor in Brooklyn, bought a used 2008 Prius in the summer, spurred by concerns over taking public transportation during the pandemic. Then last month, he went to drive it to a friend’s, and “it sounds like NASCAR,” he said.

Mr. Fontanive didn’t have full auto insurance coverage, so he had to pay $3,200 out of pocket for a replacement and repairs — half the price he’d paid for the car itself.

Determined to deter future thieves, Mr. Fontanive, who often uses metal in his artworks, drew on his metalworking skills. He bought an aftermarket metal guard for his catalytic converter, then made his own modifications, with security screws and hardened steel bell pins that would be hard to saw through.

“I really went overboard,” he said. “If they look under my Prius now, they’re just going to be like: ‘No way.’”

For car owners who aren’t trained in metalworking, or don’t want to dole out money for a metal guard, police advise parking in secure garages or well-lit areas. Etching a vehicle identification number or license plate ID on the converter could also help track it down if does get stolen.

The Kevanes are still dealing with the aftermath. The younger Mr. Kevane, who works at a Whole Foods and at an immigration law firm, recently had to drive his Prius — its exhaust blaring — to a nearby repair shop.

“God, it’s embarrassing,” he said. “People probably will think I tricked out my Prius.”

He brought the car to Tony Nguyen at Bayshore Automotive. It was the second catalytic converter theft that day Mr. Nguyen had gotten a call about — a first in his 25 years in business. A used car lot across the street has had eight converters stolen last week, he said.

Reached by phone, an exasperated Mr. Nguyen asked a reporter optimistically, “Are you going to try to solve it?” He sounded disappointed when the reporter said that only a news article would ensue.

“It’s getting worse every day,” Mr. Nguyen said. “Someone has to do something.”