President Donald Trump and his Democratic challenger Joe Biden engaged in a heated and at times ugly exchange of words in the first presidential debate of the US election.

President Trump accused Biden of being a leftist and promoting socialism. Biden openly called Trump a racist and told him to “shut up” as Trump repeatedly tried to goad Biden with interruptions.

The debate did little to illuminate the policy choices facing Americans in the election and probably did not shift the dynamic of a race in which the incumbent, Trump, is fighting from behind.

“It was awful. It was hardly a debate. What we saw was Trump being Trump which was out of control most of the time,” said Paul Beck, a political science professor at Ohio State University.

Trump recast many of his lines from the stump speech he has been giving at the airport rallies he has been holding in competitive states. “What we have heard from Trump” were the same attack lines against Biden “repeated over and over again tonight,” Beck said.

The signal it sends is Trump “thinks he is behind and he is clearly doubling down on the things he thinks will attack and undermine Biden,” Beck said. 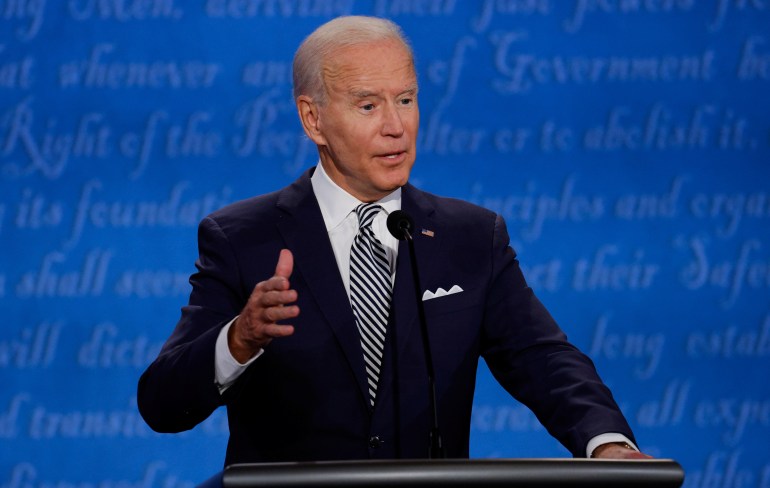 Democratic presidential nominee Joe Biden dispensed with decorum and told President Donald Trump to ‘shut up’ during their first debate [Brian Snyder/Reuters]Former vice president Biden projected an open disdain towards Trump, turning away from the president, calling him “a clown” and addressing viewers directly, saying the president is a “liar” and a “racist”.

Instead of changing the narrative of the campaign “what happened tonight turned it into a referendum on Trump,” which is a losing proposition for the president, Beck said.

At several points, Trump converted moderator Chris Wallace’s attempts to focus on policy issues into personal attacks on Biden, bringing up his son Hunter Biden’s business dealings with China and alleging he took funding from the wife of the Mayor of Moscow – all claims he has made repeatedly on the campaign trail. 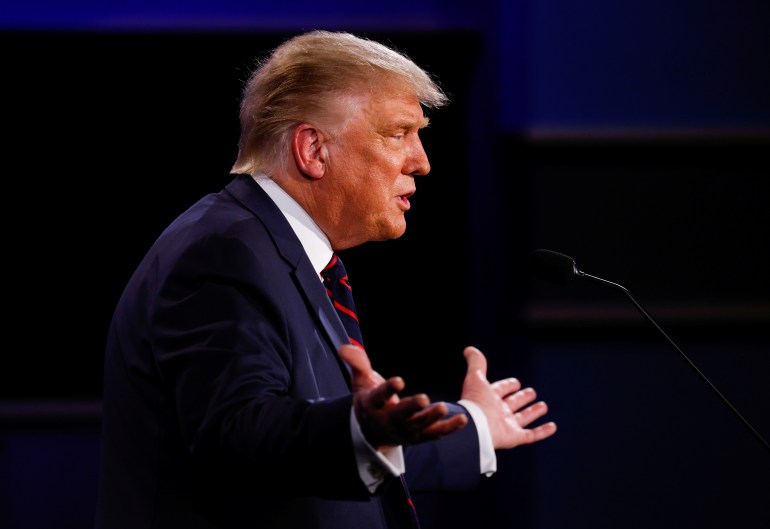 Political analysts said President Donald Trump probably did not help his campaign for re-election in his first debate with Democratic presidential nominee Joe Biden [Brian Snyder/Reuters]Biden rejected Trump’s accusations about his son as “untrue”, but the barrage forced him to acknowledge his son’s troubles in life.  “My son, like a lot of people you know at home, had a drug problem. He’s overtaken it. He’s fixed it. He’s worked on it, and I’m proud of him,” Biden said, looking not at Trump but directly into the camera.

“Trump demonstrated once again his ability to be an exponential version of himself,” said James Henson, a political science professor and pollster at the University of Texas.

“It is hard to imagine that performance persuaded anyone,” Henson said.

In an effort to “throw Biden off his game”, Trump was “disruptive beyond any precedent we have seen in a presidential debate,” Henson said.

Wallace struggled at times to keep the debate on track, repeatedly reminding Trump that his campaign had agreed to terms of the debate that gave each candidate time to state their views without interruption. 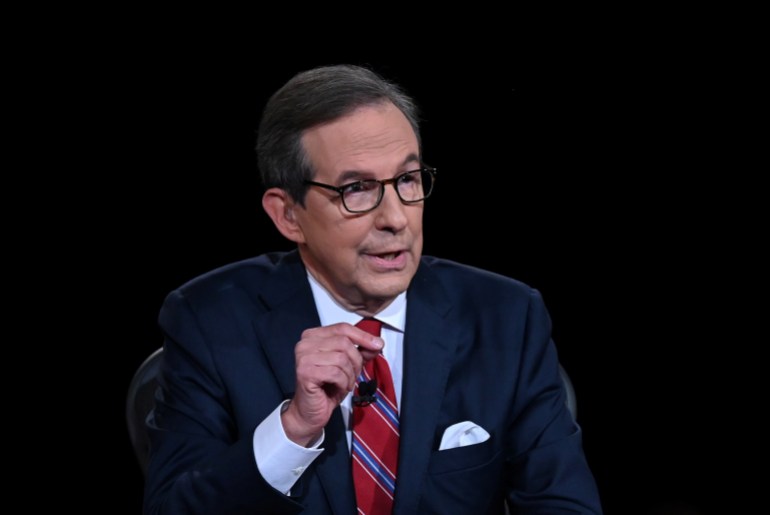 Debate moderator and Fox News anchor Chris Wallace tried to keep the debate between President Donald Trump and Democratic presidential nominee Joe Biden on substance with questions about COVID-19 response, the economy and global warming [Olivier Douliery/Pool via Reuters]Al Jazeera debate analyst Alan Schroeder said the debate was not one “either candidate particularly wanted – nothing to feature in the presidential library”.

“The bottom line is that the first debate, to no one’s surprise, changed nothing. And that’s good news for Biden,” he said.

Given an opportunity to condemn white supremacist groups like the Proud Boys, Trump equivocated. He stumbled in his answer on global warming. And he was self-congratulatory about his response to the COVID-19 pandemic that has killed more than 200,000 Americans.

Biden leads Trump in national polls by a significant margin and he leads or is competitive with Trump in key battleground states needed to win the decisive US Electoral College.

A Quinnipiac University poll released on September 23 also showed Biden with a 10-point lead over Trump, consistent with earlier polls in August.

Prior to the debate, analysts expected Trump to go on the attack.

Typically in American politics, incumbent presidents come into the debates leading their challenger “and try not to do anything to upset the trajectory of the race”, said Robert Yoon, a lecturer in politics and journalism at the University of Michigan.

This year, that dynamic was reversed with Biden in the lead and Trump having to do something to reshape the contest. Yoon expected Trump to “play the role of aggressor”.

“Trump clearly had a strategy to show he is a fighter and was not going to let attacks on him go unchallenged,” Yoon said.

But, “I didn’t really feel his debate performance did anything to win over undecided people … like suburban women,” Yoon said.

Biden at times tried to ignore Trump and speak directly to voters, Yoon said. Biden’s goal was to demonstrate he is not low energy and also avoid losing his temper. He was only partially successful.

“He did get flustered early and told Trump to shut up,” Yoon observed.

Overall, Yoon called it a “low point in American politics”.

“It was a debate in name, but it was a disservice to the voters who were watching,” he said.