The Atlantic reported US president had referred to marines buried in a cemetery near Paris as ‘losers’. 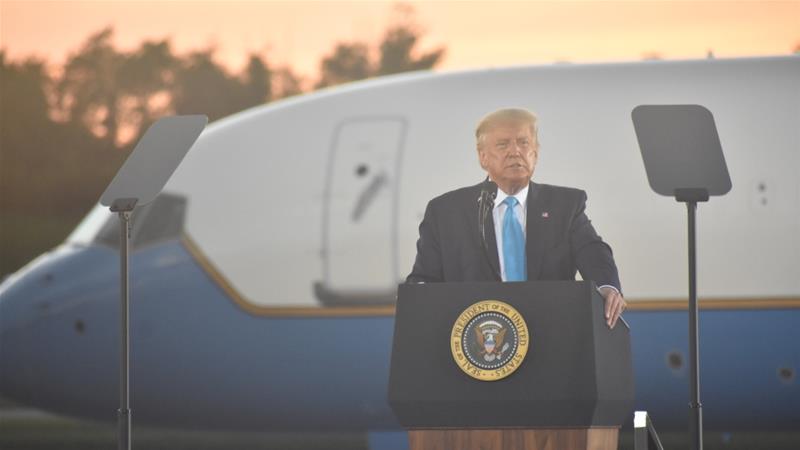 US President Donald Trump has denied a report saying he made disparaging remarks about fallen United States military personnel buried in France and declined to visit a cemetery during a trip there in 2018.

The Atlantic, citing anonymous sources with direct knowledge of the event, reported on Thursday that Trump had referred to marines buried in the Aisne-Marne American Cemetery near Paris as “losers” and declined to visit because of concern that the rain that day would mess up his hair.

Speaking to reporters later on Thursday, Trump, who is seeking re-election in November and has touted his record helping US veterans, said the story was false.

“To think that I would make statements negative to our military and fallen heroes when nobody has done what I’ve done,” for the US armed forces, the Republican president said. “It’s a total lie … It’s a disgrace.”

The president said he did not go to the cemetery because weather prevented a helicopter flight. The alternative, a long drive, would have meant going through very busy areas of Paris and the Secret Service objected, he said.

New, from @TheAtlantic: Trump skipped a visit to an American military cemetery in France after calling the dead “losers” for getting killed: Full story here: https://t.co/4PUGrR7tCS

According to The Atlantic, in another conversation on the trip, Trump referred to the 1,800 marines who died in the World War I battle of Belleau Wood as “suckers” for getting killed.

The publication said Trump also referred to former President George H W Bush as a “loser” because he was shot down by the Japanese as a Navy pilot in World War II.

Democratic presidential candidate Joe Biden, who is leading Trump in national polls before the November 3 election, emphasised his own commitment to helping members of the military in a response to the report.

“If the revelations in today’s Atlantic article are true, then they are yet another marker of how deeply President Trump and I disagree about the role of the President of the United States,” Biden said in a statement released by his campaign.

“And if I have the honour of serving as the next commander in chief, I will ensure that our American heroes know that I will have their back and honour their sacrifice – always.”