Trump on US coronavirus deaths: 'It is what it is'

Trump made the comment during an interview in which he also downplayed the legacy of civil rights icon John Lewis. 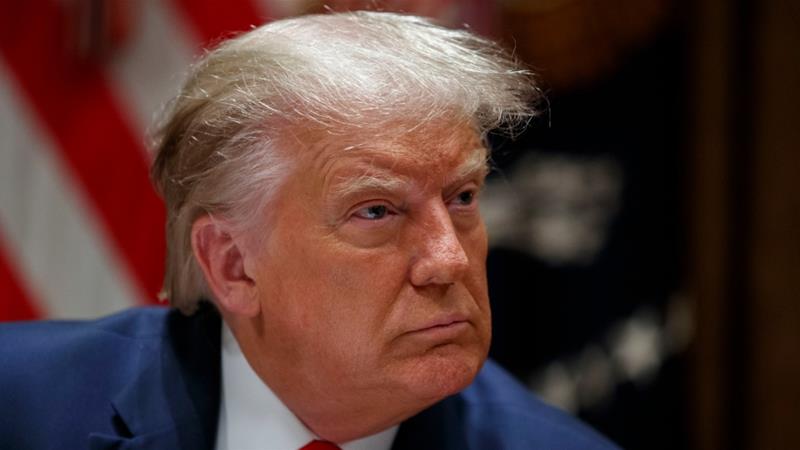 United States President Donald Trump, in a wide-ranging interview, has contended the coronavirus outbreak in the country was under control, downplaying  the legacy of recently deceased congressman and civil rights icon John Lewis, and again calling into question the use of mail-in voting in the upcoming election.

In the interview, which aired on the show Axios on HBO on Monday, Trump sought to downplay the coronavirus outbreak in the US, saying it was “under control”.

When pushed on that characterisation, Trump responded: “They’re dying it’s true. It is what it is, but that doesn’t’ mean we aren’t doing everything we can. It’s under control as much as you can control it.”

Trump and reporter Jonathan Swan also sparred over the metrics used to measure the country’s battle against the coronavirus.

While the US has the highest number of confirmed cases and deaths of any country in the world, Trump contended that the number of fatalities was not as significant when looked at deaths against confirmed cases in the country, not the overall population.

To date, the US, a country of about 328 million, has recorded more than 4.7 million cases and 155,000 deaths amid a new surge in western and southern states.

“You have to go by the cases. The cases,” Trump said.

When Swan asked “it’s surely a relevant statistic to say the US has X population and X percentage of death of that population”, Trump responded: “No, because you have to go by the cases.”

Trump also defended his decision not to pay his respects following the recent death of Lewis, a US Congress representative and civil rights activist who played an instrumental role in passing the Voting Rights Act of 1965.

When asked about Lewis’s legacy and how he will be remembered, the president instead focused on the congressman’s decision not to attend Trump’s 2017 inauguration.

“I really don’t know … I don’t know John Lewis. He chose not to come to my inauguration,” he said. “I never met John Lewis, actually, I don’t believe.”

The president did not attend a memorial on July 28, in which Lewis, who died of pancreatic cancer, laid in state in the US Capitol. Vice President Mike Pence, who had served in the House of Representatives with Lewis, did attend.

When pushed, Trump added, “He was a person that devoted a lot of energy and a lot of heart to civil rights, but there were many others also.”

During the at times contentious interview, which comes amid weeks of unrest following the custodial death of George Floyd in Minnesota in May, Trump also asserted that “no one has done more for Black Americans than I have”.

The president also continued to raise scepticism over large-scale mail-in ballots for the November presidential election, saying “this election could be decided two months later” due to related delays.

“Lots of things that can happen during that time, especially when you have tight margins,” he said.

The president again reiterated the claim, which is not supported by evidence, that mail-in voting leads to widespread voter fraud.