It’s been a wet and windy few days for many of us and there’s worse yet to come as the Met Office warned Sunday could see even heavier spells for parts of the UK. A forecaster said Sunday is “looking like a day of sunshine and showers across the UK” with many of us having woken to a rather fresh start this morning. But the UK weather agency says warmer weather is on its way thanks to a 600-mile “subtropical swell” sweeping in across the Atlantic.

Psoting a video on Twitter, the Met Office showed a plume of warm air is tracking across the Atlantic and heading for the UK – reaching us on Tuesday.

The caption said: “After a relatively cool #weekend things will warm up again next week.”

The clip showed ‘relatively cool air currently swooping down toward the UK, before the red band of warm air pushes this eastwards before descending on the UK, brining temperatures up to 24C.

And it’s not just Britain benefitting from the sunnier spells. Maps from WXCharts, which gathers data from MetDesk, reveal Europe is in for a sunny few weeks as the temperatures begin to climb back up. 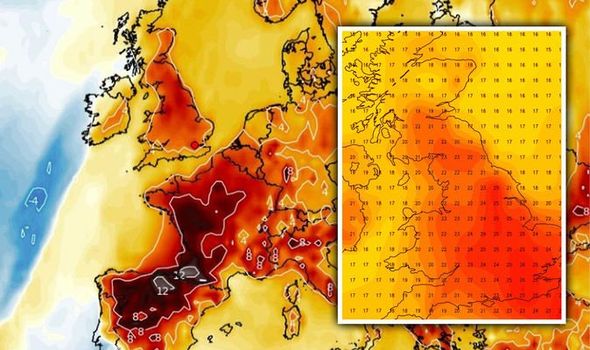 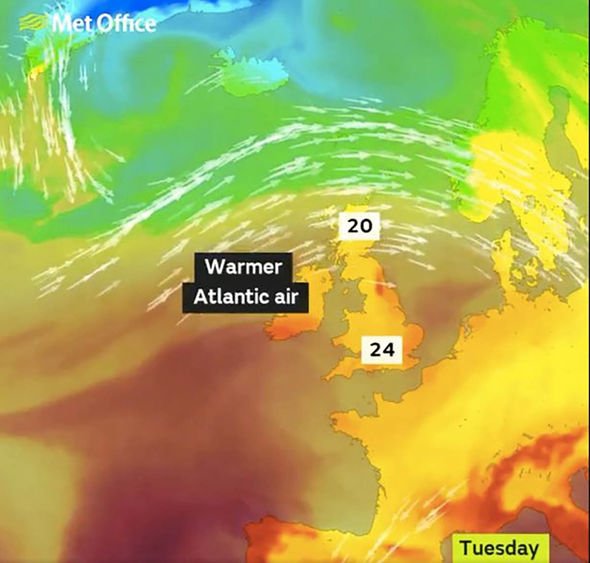 Maximum temperatures maps for Spain and Portugal show some areas will reach a staggering 39.3C on Monday (102F) before settling at about 35C into the rest of the week.

In fact, Monday through to Friday will see the south western areas of Spain and almost the entire south coast of Portugal enjoying wall-to-wall sunshine,

Then from Saturday, temperatures take a small dip to about 28C before ratcheting up to 33C on Sunday afternoon.

A further dip is then expected from Tuesday, September 15 where temperatures drop below 30C.

Elsewhere in Europe, France will also see some warmer weather – with 25C along the southern coast expected on Monday, moving to about 27C for the rest of the week before jumping up to 29.9C on Sunday.

Towards the west, temperatures near Bordeaux will reach up to 32C on Wednesday, continuing to hover around the 30C mark for the rest of the week.

And in Greece, temperatures will stay at about 34C all week, while parts of Turkey along the south western coastline could even hit 41C. 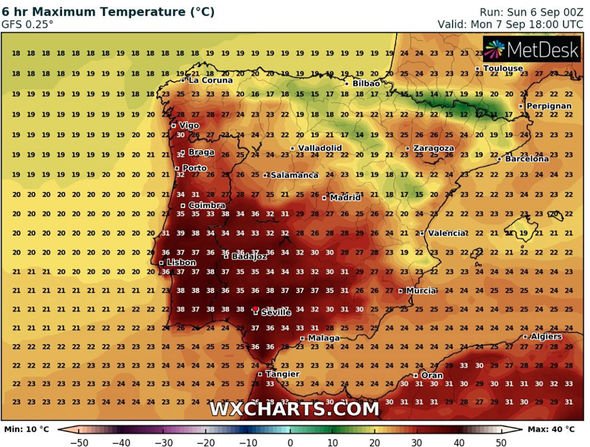 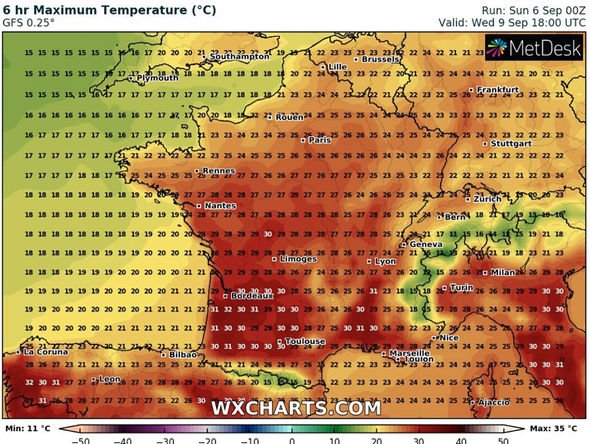 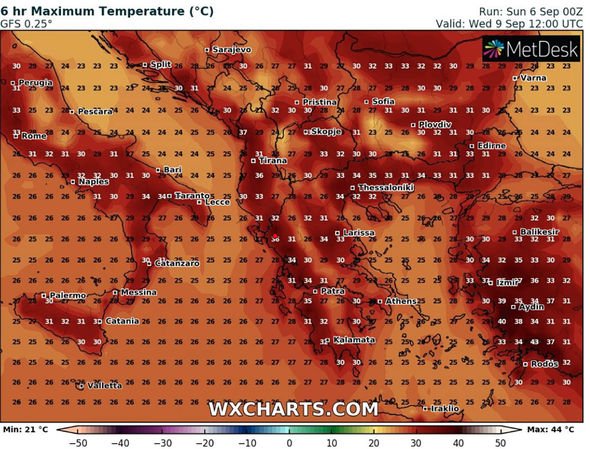 Back in the UK and while we won’t quite get those highs, we will still have a few warm days ahead.

The next seven days will get off to a slightly cooler start with much of the UK at between 15C and 19C on Monday.

Moving into Tuesday, and the sunnier skies will have moved in with a warm orange glow appearing to cover parts of the south west where temperatures will reach up to 24C.

Into Wednesday and some parts may see 23C with the south east again enjoying the best of the weather, though much of the country will dip again to around 16C. 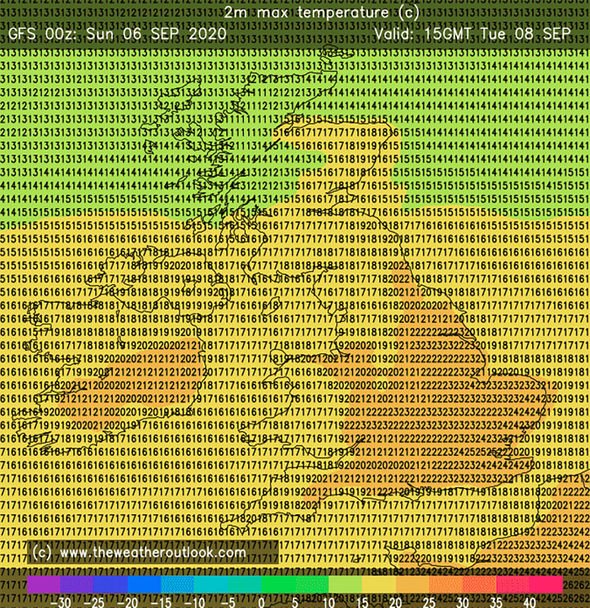 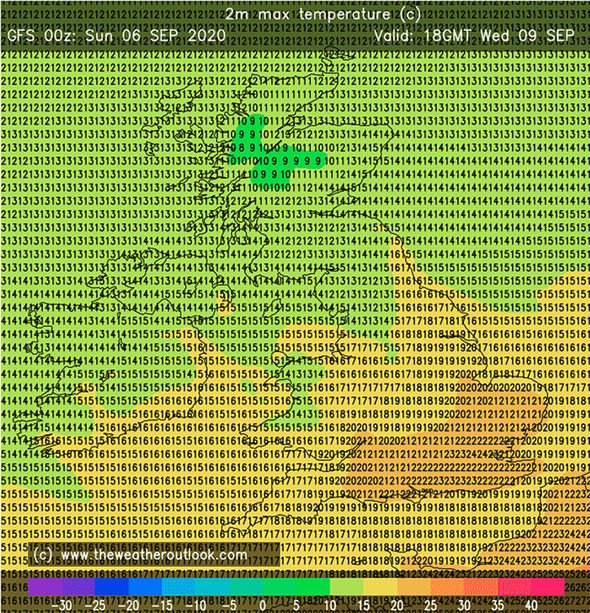 Onto Thursday and the temperatures dip once more, before picking up to around 21C for the south coast.

But it’s Monday, September 14 and Tuesday, September 15 where the real heat will kick in with the whole country turning shades of yellow and red as the temperatures rocket up to 24C.

London and the surrounding area may even see 26C by about 6pm on Tuesday evening.

This is all thanks to tropical maritime air which will sweep across Britain in the coming days seeing the temperatures rise to the mid-twenties, according to the Met Office. 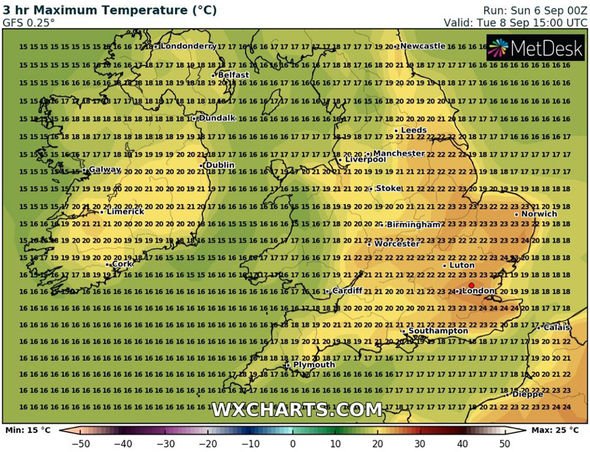 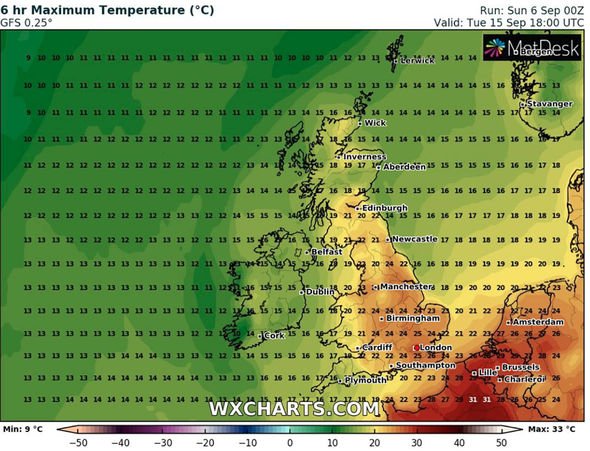 However, we may be looking at blustery showers and cloudy skies when the heat sets in.

The Met Office forecast for Monday to Thursday reads: “Rain in north gradually moving into northwest England and Wales, persistent for upslopes.

“Outlook for Tuesday to Thursday: Often cloudy with some rain and drizzle in western areas, often bright and sunny in the sheltered east.

“Becoming widely fine and sunny by Thursday, although chilly by night.”