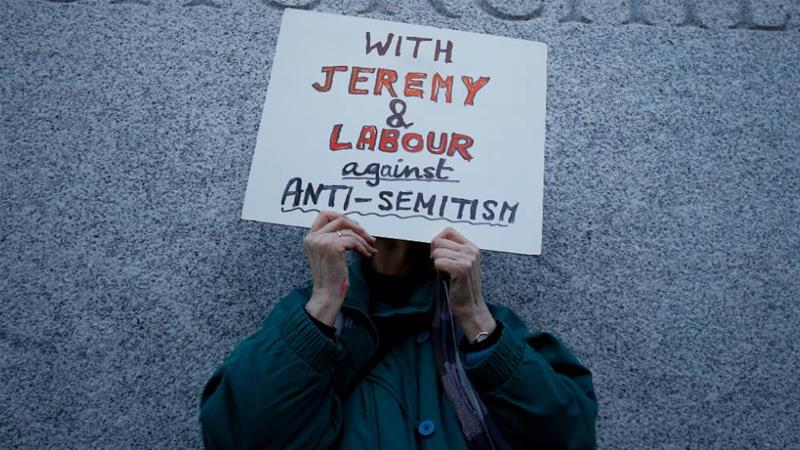 London, United Kingdom – The new leader of the United Kingdom’s main opposition Labour Party has launched an “urgent investigation” into a leaked report documenting deficiencies in how the party dealt with complaints about anti-Semitism.

Announcing the investigation on Monday, Keir Starmer said the probe would focus on why the report was commissioned, its findings and also how the document was released into the public domain.

“In the meantime, we ask everyone concerned to refrain from drawing conclusions before the investigation is complete,” Starmer added in a joint statement with his deputy, Angela Rayner.

The pair added the leaking of the report and its contents had raised “a number of matters of serious concern”.

“We have also asked for immediate sight of any legal advice the Labour party has already received about the report,” they said.

The announcement of the investigation came just 24 hours after the 850-page internal Labour Party document – seen in full by Al Jazeera – was first reported on by the UK’s Sky News.

Completed in the final months of Corbyn’s tumultuous leadership, the report concluded factional hostility towards him among former senior officials had contributed to “a litany of mistakes” that hindered Labour’s response to a slew of anti-Semitism allegations that had plagued the party since 2016. It also suggested senior party figures were actively working to hinder the party’s chances in the 2017 election.

The document – dated March 2020 – was reportedly intended to be submitted as an annexe to Labour’s response to an investigation by the Equality and Human Rights Commission (EHRC).

The watchdog launched a probe into anti-Semitism within the party in May of last year after a complaint from UK-based NGO Campaign Against Anti-Semitism. Reports suggest the document will not now be submitted to the commission, however.

Labour’s press team could not be reached for comment by Al Jazeera on Monday.

The Campaign Against Anti-Semitism, the leadership of which was criticised in a 2015 all-party inquiry into anti-Semitism for having on occasion conflated legitimate protest against Israel with anti-Semitism, said the report “serves as an exhibit of the party’s failure to address the crisis”, and should be handed over to the EHRC.

“In the dying days of Jeremy Corbyn’s leadership, the Labour Party appears to have invested in a desperate last-ditch attempt to deflect and discredit allegations of anti-Semitism,” Gideon Falter, the organisation’s chief executive, said in a statement.

“Rather than properly dealing with cases of anti-Semitism and the culture of anti-Jewish racism that prevailed during Mr Corbyn’s tenure, the party has instead busied itself trawling through 10,000 of its own officials’ emails and WhatsApp messages in an attempt to imagine a vast anti-Corbyn conspiracy and to continue its effort to smear whistleblowers.”

Corbyn, who was elected party leader in 2015, was repeatedly dogged by criticism from party members, legislators and Jewish leaders, who said he had failed to tackle anti-Jewish racism in the party during his tenure as leader, despite promising to do so.

Staunch defenders of the veteran socialist member of Parliament, who himself had labelled anti-Semitism “a poison and an evil”, repeatedly dismissed the claims as a smear campaign against him.

But Labour’s report said it had disproved any suggestion the issue was not a problem in the party, or that claims such racism existed were either a “smear” or a “witch-hunt”.

“The report’s findings prove the scale of the problem, and could help end the denialism amongst parts of the party membership which has further hurt Jewish members and the Jewish community,” it said.

However, the report added there was “no evidence” of anti-Semitism complaints being handled differently than any other kind of complaints, or of current or former staff being “motivated by anti-Semitic intent”.

The leaked document also hailed disciplinary measures taken by Corbyn since 2018, including the introduction of fast-track expulsions, describing the changes as “transformational”.

“These safeguards ensure that the past mistakes in the handling of anti-Semitism complaints cannot be repeated now,” it said.

But it said a “hyper-factional atmosphere prevailing in party HQ” had appeared to have “affected the expeditious and resolute handling of disciplinary complaints” before 2018, when Jennie Formby, the current general secretary, took over as the party’s most senior official from Iain McNicol.

“Many staff, including Governance and Legal Unit (GLU) staff and senior staff with responsibility for managing and overseeing GLU, were bitterly opposed to the leadership of Jeremy Corbyn,” it added.

“At its extreme, some employees seem to have taken a view that the worse things got for Labour, the happier they would be, since this might expedite Jeremy Corbyn’s departure from office.”

The report contains several leaked WhatsApp messages that reveal the extent of senior officials’ hostility to Corbyn when he took over as leader.

Former advisers to the Islington North member of Parliament, including Director of Communications Seumas Milne and Chief of Staff Karie Murphy were referred to as “Dracula” and “Medusa” respectively, while supporters were derided as “trots” – short for “Trotskyists”.

Reaction to the leaking of the report was swift on Monday, with a group of Labour MPs demanding its findings be released “officially” and “in full”.

The statement by the Socialist Campaign Group of Labour MPs – populated by 29 of the party’s 243 Members of Parliament – also called for an emergency meeting of Labour’s National Executive Committee to discuss the document’s contents.

“This process must produce a report, that is publically available, which restores faith among Labour members in the practices of our party,” it said.

Starmer, a knighted barrister and former UK director of public prosecutions, fended off a challenge from two of his rivals in the party – Rebecca Long-Bailey, a Corbyn loyalist, and Lisa Nandy – to be elected as Corbyn’s successor on April 4.

“Clearly, there’s still a huge amount of factional infighting going on, and that, I presume, will continue for some time,” Tim Bale, a professor of politics at London’s Queen Mary University, told Al Jazeera.

Bale added the dispute may largely go under the radar among the electorate with attention overwhelmingly focused on the UK’s battle against the coronavirus pandemic, but warned it would do little to help their bid to break the Conservative Party’s more-than-decade-long grip on power.

“Unfortunately, this will give the impression that Labour is intent on fighting like cats in a sack rather than prioritising the needs of the country,” he said.

“Clearly this is a serious story, and at any other time, Labour would suffer a great deal from the row, but given most people have far bigger priorities at the moment it’s likely to pass unnoticed among people who quite sensibly don’t pay too much attention to politics.”