Low pressure from the North Atlantic is forecast to sweep over the UK during Christmas week, potentially bringing wintry conditions including freezing sub-zero temperatures and snow. There could be up to 10 inches of snow falling by next Sunday in Scotland, according to WXCHARTS. North west regions including Cumbria could also see up to three inches laying by the end of the week. Temperatures are also expected to drop as low as -5C in Central Scotland during this time, the maps suggest.

England will also be battered by bitterly cold weather, with north west regions including Liverpool likely to see lows of -0C.

On Christmas Day, temperatures are expected to stay in single figures of 3C as far south as London and Bournemouth.

The BBC’s long range forecast predicted low pressure to sweep in during the first half of the week.

The forecast said: “The first half of this week will continue in the same vein as the previous week, with additional low pressure areas continuing to track north-eastwards over the UK. 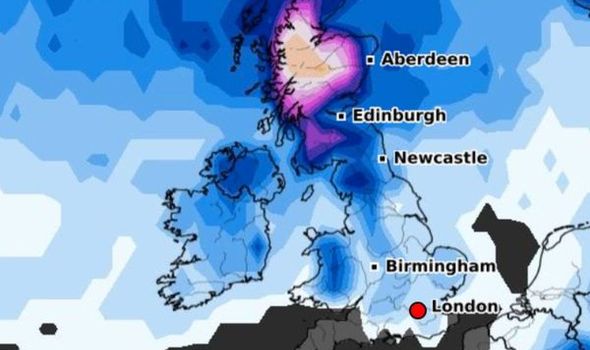 “Because we have relatively high pressure to the north of the UK, the north Atlantic low pressure track is displaced a bit further south than where it would normally be in December. This means that Wales and south-west England will continue to bear the brunt of the strongest winds and heaviest rainfall, rather than western Scotland and Cumbria.

“Milder than average conditions in the early part of the week, due to a combination of south-westerly winds, extensive cloud cover, rain and often windy weather. T

“his will prevent a frost forming at night. However, there is a slight risk that Scotland and even northern England could get into some chillier air on Tuesday 22nd and Wednesday 23rd, if the low pressure areas fail to push up quite as far over the UK.”

The forecast added colder conditions could arrive by Christmas Day, with a chance of snow.

The BBC said: “Some forecast computer models support this risk. This would mean the chance of a slight frost at night here, and maybe some sleet and snow over the mountains of Wales and northern UK. 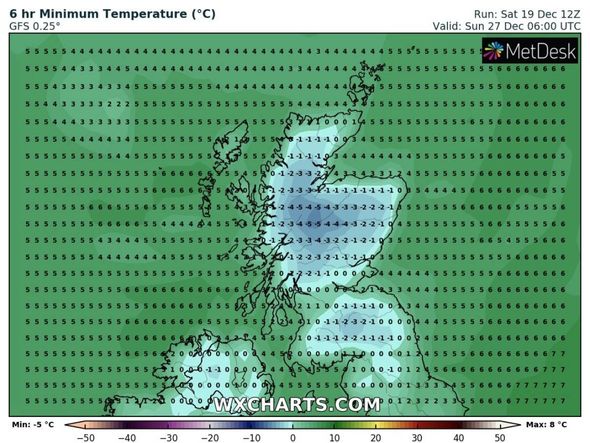 “By Christmas Eve and Christmas Day, confidence is growing for at least a couple of days of colder and brighter weather, as winds change to a north-westerly direction and a ridge of high pressure then moves in from the west.

“Scattered wintry showers in this north-westerly flow may fall as snow, raising the possibility of a white Christmas in parts of the UK! Scotland and the hillier parts of northern England and Wales stand the best chance. Stay tuned to the forecast over the next few days. Some sunshine by day, but a frost is very likely at night for many places.

“Additional fronts moving in at the end of week will bring some rain. A slight chance of this falling as snow for a time as the fronts move into colder air over the UK.”

The Met Office added snow could arrive in the north and east during the festive period. 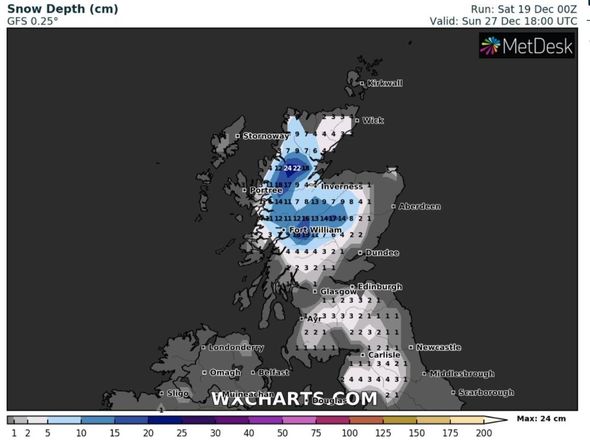 The long range forecast said: “There is potential for outbreaks of heavy rain in the south at the beginning of this period.

“Otherwise, a ridge of high pressure is expected to build to the west of the UK, bringing cold conditions, and remaining the dominant pattern for the rest of the year, with many southern and western parts becoming predominantly dry and settled.

“North and east seeing the greatest chance of showers, with these falling as snow in places, especially on higher ground. A potential for strong winds in the far south at first; later, any strong winds are likely to be confined to the north and perhaps the east.

“Prevalence of overnight fog and frost is likely increasing, with fog potentially slow to clear. Temperatures either close to or below normal.” 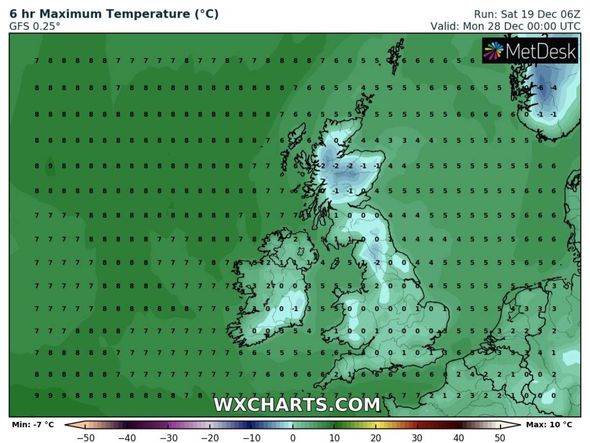 Paul Michaelwaite at Netweather added low pressure could arrive as early as Sunday.

He said: “Later Sunday, another batch of wet, windy weather is going to start to arrive into the southwest, as a low pressure system moves in from the Atlantic.

“That’s going to push the rain and wind up across England, Wales and very likely southern Scotland, overnight and into the start of Monday.

“There is some uncertainty over the track of the low pressure though, it may scoot away further to the south, but equally a slightly more northern track is a possibility, which would make for a more widespread spell of wind and rain across England and Wales into midweek.”