Low pressure will sweep a cold front from the east that has been forecast to bring snow at the start of this week. Central Scotland is expected to be hit with up to 10cm of snow on Monday, according to WXCHARTS’ snow depth models. The latest snow probability charts turn red and orange, suggesting there is up to 90 percent change of snow hitting regions including Fort William and Inverness.

The charts turn purple and blue in northwestern areas such as Cumbria, which could means there is between 30 and 50 percent chance of snow.

Temperatures are also forecast to plunge as low as -2C in Scotland and stay a bitterly low of 0C further south in Manchester London and Southampton.

Netweather’s Nick Finnis predicted a cloud of freezing fog to sweep over the many parts of southern and eastern England tonight, bringing a risk of ice.

He said: “Staying largely dry Sunday night, another cold night, large amounts of cloud around across central, southern and eastern England, but where skies clear, frost and freezing fog will form.

“A risk of icy patches on untreated wet surfaces. A few showers possible around coasts.” 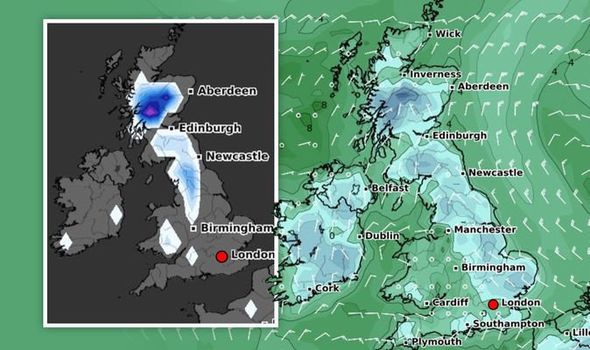 Mr Finnis added snow could arrive in the north east and Scotland.

He said: “Monday will be a largely dry but chilly day, rather a lot of cloud around, with some places grey and misty all day, but some bright or sunny spells will develop, particularly across the west. The UK will be in between two weather systems to the east and west.

“The one towards the west could bring some showers to Irish Sea coasts, Devon and Cornwall – as it slides southeast.

“While the one to the east moving up the North Sea will introduce outbreaks of rain and strengthening winds across north east England and eastern Scotland in the afternoon, falling as snow over hills. 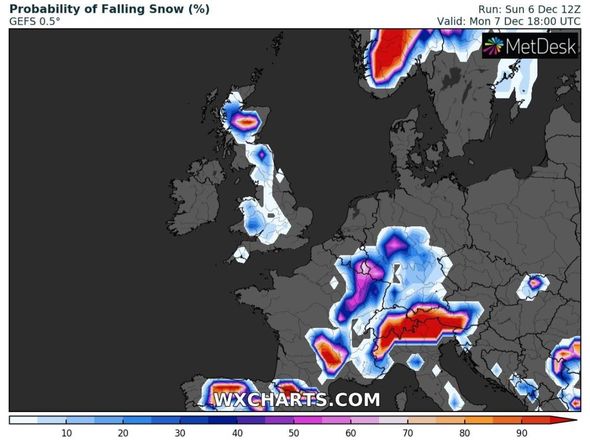 The forecast said: “Cold with frost for many tonight. Fog and freezing fog patches developing over parts of Northern Ireland and particularly southern and central England. Some rain or showers for parts of northern England and Scotland. 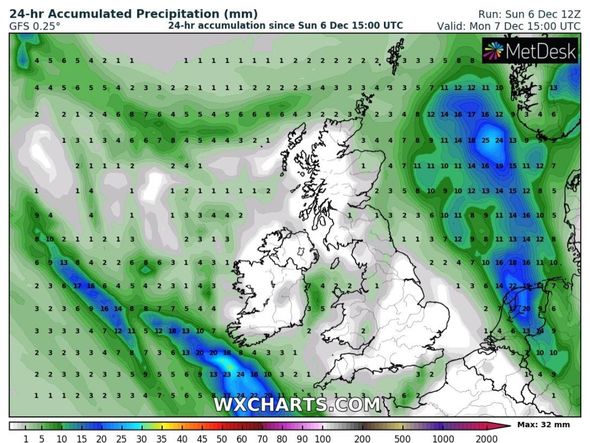 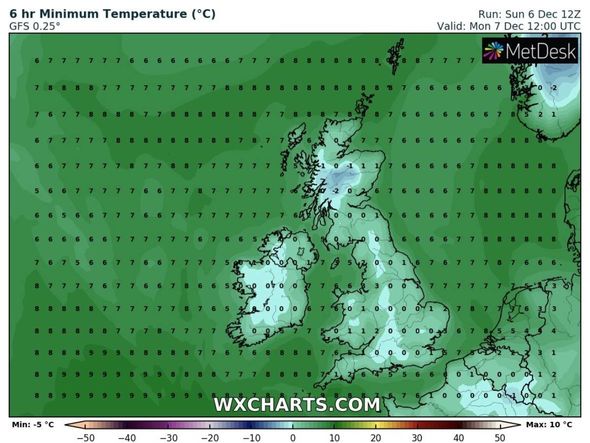 The BBC’s weather forecast for Monday, December 7 until Sunday, December 13 added snow is most likely to fall across the Pennines, Peak District and southern Scotland.

The forecast said: “Monday will see a new area of low pressure moving in from the east, introducing extensive cloud cover to northern, central and eastern areas with showers or longer spells of rain, sleet and hill snow moving west.

“Most snow of any consequence will be over the Pennines, Peak District and eventually southern Scotland. There will be a lot of dry and bright weather across the south-west of the country thanks to a weak high pressure ridge here.

“It will stay rather cold with a frost early and late in the day in some western areas.” 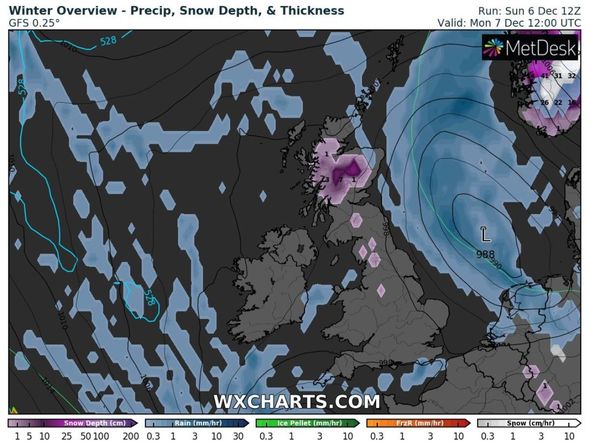 The BBC added snow may linger later in the week due to frost settling.

The forecast said: “Tuesday has low confidence on the behaviour of a new low pressure system expected to approach from the west.

“It looks like this will bring rain and wet hill snow or sleet to Wales and England, even possibly in the south of England (more likely sleet than snow here).

“Scotland will more likely miss most of the precipitation thanks to a high pressure ridge building to the north, which should push the low pressure system south-eastwards. Just a few scattered showers are possible. There is a slight chance that the low will track farther north, bringing rain and hill snow to Scotland, and milder but rainy conditions to the south.”