The blistering heat will begin sweeping into the UK today, tomorrow and Wednesday – sending the mercury spiralling up to 25C (78.8F) in the south east, according to the BBC. Temperatures will explode higher still next week, as temperatures approach 30C around the capital.

But WXCharts shows a sharp rise in temperatures in the UK this month, especially next week.

While London will see the highest temperatures, other parts of Britain will also roast on June 15.

Most of East Anglia could hit highs of 24C or 25C, as will parts of the north of England. 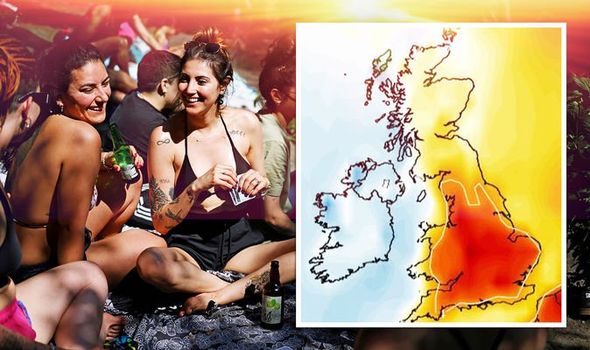 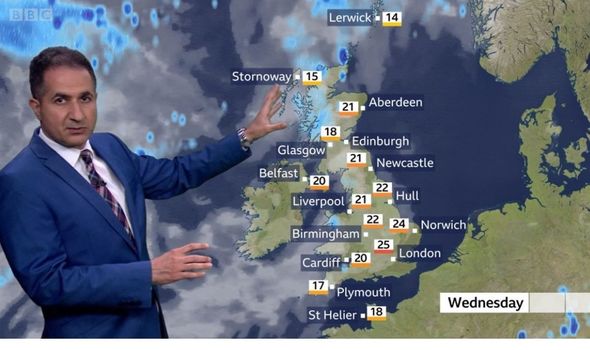 The west of Wales will be stuck in the mid-teens but the east of the country will enjoy highs of 23C or 24C.

And WXChart’s temperature anomaly chart, which compares temperatures with the historic average for the same time of year, showed the country turn dark red.

This indicated temperatures between 2C and 6C higher than usual.

BBC weatherman Stav Danaos said hot weather was expected because the UK will sit south of the gulf stream next week – leading to high pressure “dominating” across the country. 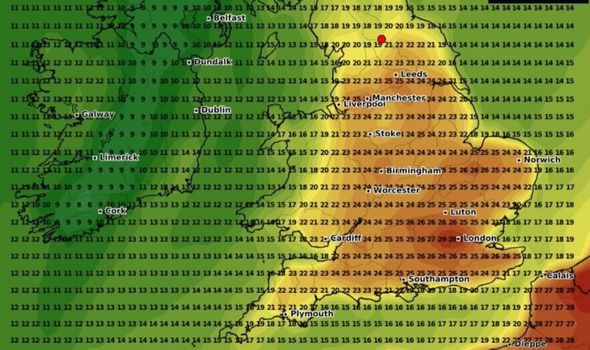 He added: “This upcoming week is looking fairly mixed.

“So for the north and the west we’re going to see some more cloud, breeze (and) even some patchy rain at times.

“And it could be quite misty and murky with that wild south westerly wind. 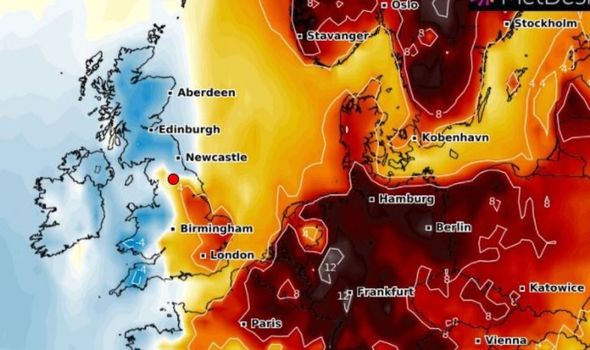 “Further south east, closer to the higher pressure, it’ll tend to be warmer with more in the way of sunshine and lighter winds.”

From tomorrow the weather front will increasingly push into the north which is “why we’ll see increasing cloud” there, he explained.

This will make way for “higher pressure” for much of England and Wales, he explained.

“It’s here that we’re going to see the best of the sunshine again throughout the day (on Tuesday).” 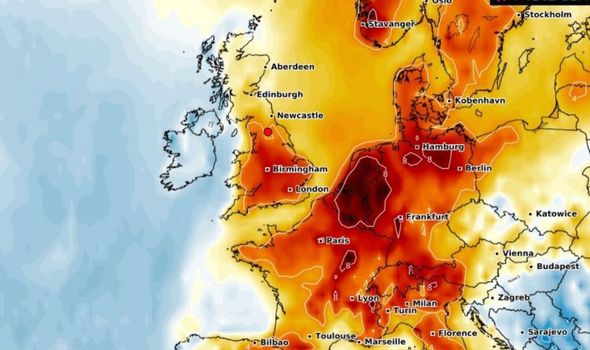 People living in the north and west of the UK, closer to the colder weather fronts, will see “more breeze, more cloud and some spots of rain” during this time, he said.

Despite this, much of England and Wales will bask in temperatures reaching 23C (73.4F).

On Wednesday he explained that the UK will have “high pressure to the south and lots of isobars to the north west”.

This will cause the north-south split to continue as temperatures spiral to 25C (78.8F) around London.

Thursday will see more of the same with the “high pressure continuing in the south” while clouds “encroach” creating “a windy day for the north west”, he said.

He warned that wind speeds could reach 40mph, with the worst of the weather due to hit the Scottish Hebrides pushing temperatures as low as 15C (59F) in parts of the Highlands.

South eastern England will be spared much of this torrid weather and continue to enjoy highs in the mid 20Cs.

“It’s an improving picture for Friday,” he added.

“I think we’ll see this rain clear away from the north.

“Many places will be drier thanks to that building high pressure.

“(There will be) more sunshine even across Scotland and Northern Ireland.”

And the good news is that the glorious weather is set to continue into next week, he said.

The UK will remain south of the jet stream so high pressure will continue to “dominate” the country’s weather front.