High pressure will blast the north during Tuesday, pushing any showers likely to western Scotland. The weather system will bring best sunshine in central and eastern regions, with highs reaching into the the mid-twenties, according to Net Weather. 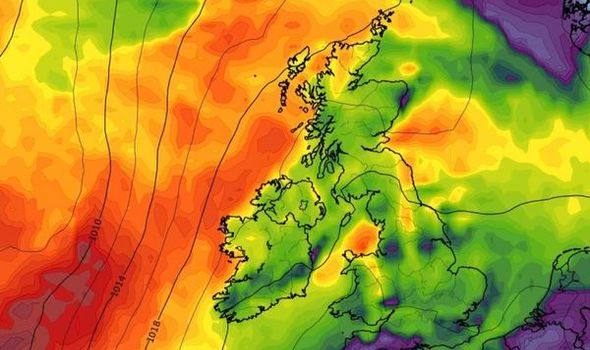 The latest Weather Outlook forecast added that temperatures will rocket to nearly 30C on Tuesday and Wednesday.

It said: “The warm and settled period continues in the southern half of the country on Tuesday and Wednesday. In the north west there is a risk of showery rain early on. Temperatures in the south east could reach 27C (81F).

“The fine conditions may continue in southern and central regions on Thursday. In the north outbreaks of rain are likely to push in from the west.

“Through Friday and the weekend a more changeable theme is expected to return. All regions could see showers or longer spells of rain. The driest and brightest conditions will probably be in the south and south east.”

Net Weather forecaster Paul Michaelwaite agreed the middle of the week will experience the hottest temperatures.

He said: “By Wednesday, that high pressure should just about be in charge across the whole of the UK.

“That means plenty warm sunshine with temperatures widely closing in on the mid-twenties and perhaps a little beyond.

“The southerly wind may mean some mist and low-cloud touching southern coasts though, keeping it cooler here.”