Much of the country has enjoyed clear sunny weather in recent days but conditions are expected to change this week. Heavy rain and bone-chilling temperatures are expected to grip the country this week, forecasters have said. BBC Weather forecaster Helen Willetts said: “Through Monday and Tuesday an area of low pressure sinks southwards and then hangs around so the rain will turn more showery.

“Some areas will miss the rain, it’s certainly not guaranteed.

“But there will be some heavy showers around as that low pressure lingers close by.

“But as it shifts its way eastwards, it allows us once again be exposed to a northerly wind coming right the way down from the Arctic.”

The forecaster added: “By Tuesday, it is going to be more showery. Given the strength of the April sunshine, there will be some big showers in the coming week with hail and thunder, but not for all.

“The South East probably staying dry on Tuesday and behind that low pressure in comes the northerly wind, but with it more cloud than we have been used to for the past week.”

The BBC Weather forecaster warned of “heavy showers” and “rumble of thunder” on Wednesday. 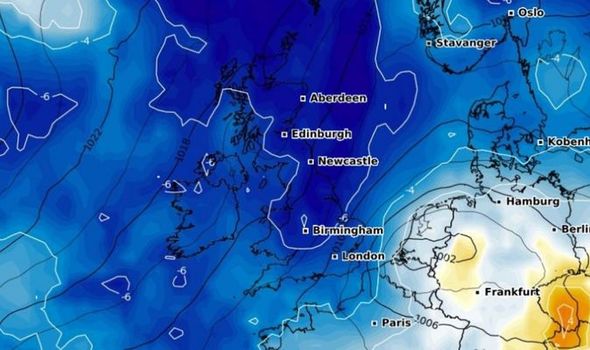 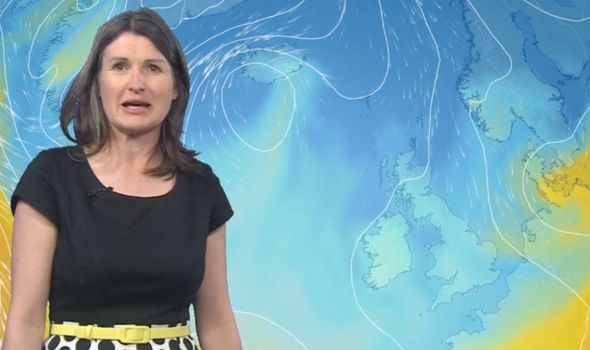 With the cold air moving in, some in northerly areas were told to expect “night frost” and there could even be wintry showers over the Scottish mountains.

Met Office Chief Operational Meteorologist Steven Ramsdale said: “The weather heading into the bank holiday weekend is going to be a little more unsettled than we’ve seen in recent days.

“There will be rain or showers at times for many, which is likely to be welcomed by many farmers and gardeners after a dry April so far.”

Minimum temperature charts by WxCharts suggest thermometers could fall to as low as -2C in some parts of Scotland in the early hours of Thursday morning and -1C across northern parts of England.

The same map shows much of England, Wales and Northern Ireland falling to near freezing conditions.

BBC Weather’s forecast from Monday 26 April to Sunday 2 May also warned of more unsettled conditions in the coming days.

Its forecast read: “Low pressure on Monday and Tuesday brings a chance of rain across the country, with the wettest conditions in the north and east. 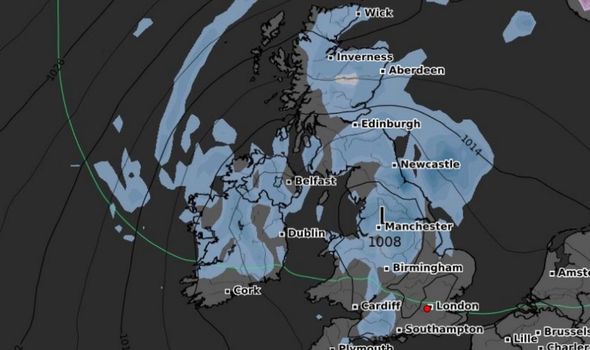 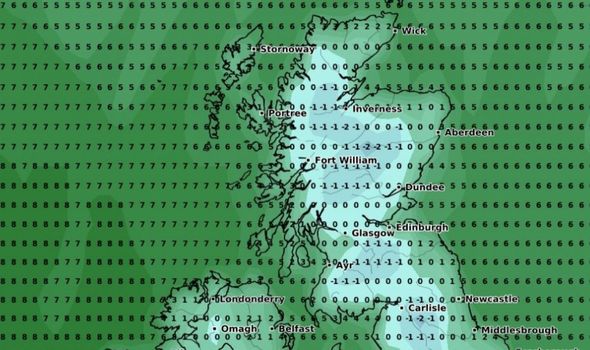 “Later in the week and through the weekend, showers are possible although many areas are expected to stay dry.

“Light winds will be coming from a northerly direction, therefore temperatures will continue to feel below average for late April. There will also be a risk of frost in rural areas at times.

“There is potential for slightly stronger high pressure to develop which would keep things dry and sunny, but still cooler than normal.

“This scenario is around 25 percent likely to develop. We have higher confidence that colder air will stick around for the rest of April but lower confidence on the chance of showers occurring.”

Brian Gaze from The Weather Outlook said “heavy bursts” of rain were possible from Tuesday in the north and west. 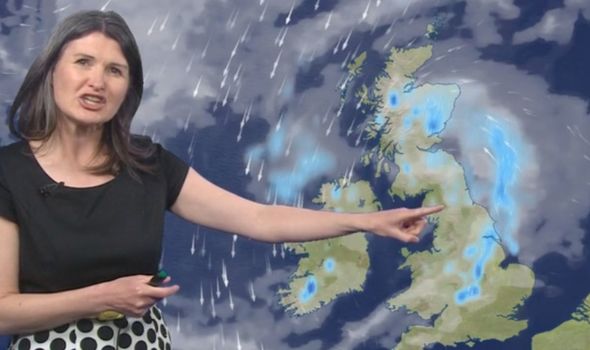 “The showers could be heavy at times and over high ground in the north there is a risk of sleet or snow. Despite that, many places probably stay dry and bright.”

Looking ahead to next week, the forecaster said thermometers would be “a little below the average for much of the time, although later on they may recover”.

Mr Gaze wrote: “There is a risk of showers and they could become heavier at times. However, many places probably have a lot of dry weather.

“In areas where clear periods form, nighttime frost remains possible, with the greatest likelihood in the north.”