One flood alert is in place for today, with Upper River Wey in central England warned of potential issues on roads and farmland. Much of the UK will stay mild in temperatures and wrapped in cloud cover throughout the day. Intermittent spells of rain are expected along the midlands and southwest in the morning, with Glasgow and Cardiff also set for a wet start to the day. But come Wednesday and a plume of rain will push eastwards across Scotland and Northern Ireland, bringing with it harsh winds.

Aiden McGivern, meteorologist at the Met Office, said low pressure across the UK will bring humidity and, throughout the night, some heavy downpours across the southwest.


He added: “Showers petering out elsewhere but a lot of cloud cover for most, that means it’s a mild night. One exception, northern Scotland will see clear spells because the southerly wind breaks up that cloud over the higher ground, and so northern Scotland a bright but chilly start to Tuesday.


“Grey leaden skies elsewhere, and a milder start. The low cloud and mistiness at its gloomiest I think in the east. But elsewhere slowly brightening up, and I think a brighter day to come for many places, certainly a better chance for some sunshine to the southwest and then across central parts of England, we’ll continue to see some across northern Scotland.


“Cloudier elsewhere, further showers but not as many as Monday.” 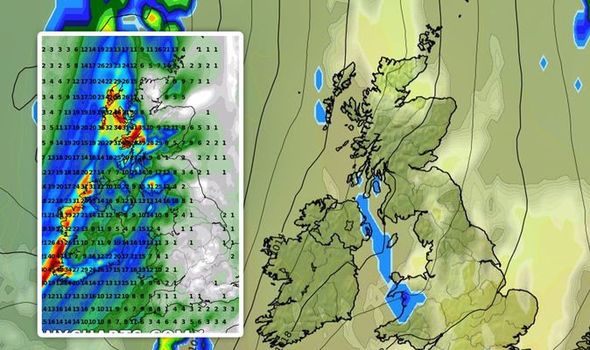 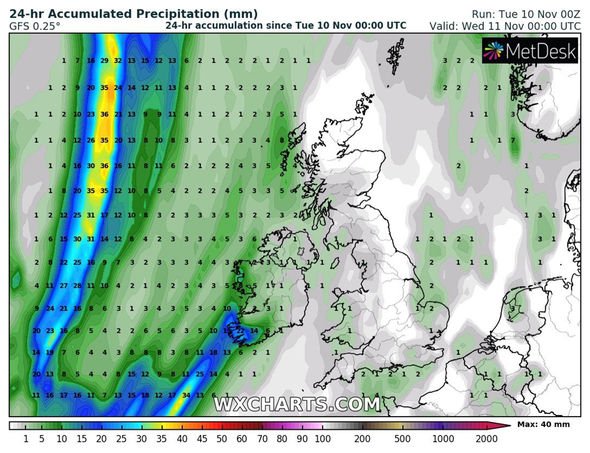 Throughout the night showers will be felt over the southwest coast of England and Wales.


These will be light, less than 0.5 mm of rain an hour, and are mostly expected to clear up as the morning rolls in.


By 9am, Cardiff will have a wet start to the day along with Glasgow, but with mild winds at less than 10mph.


The rest of the UK will have a gentle and mild start to the day, with an average of 6mph winds felt across the UK, with rainfall unlikely. 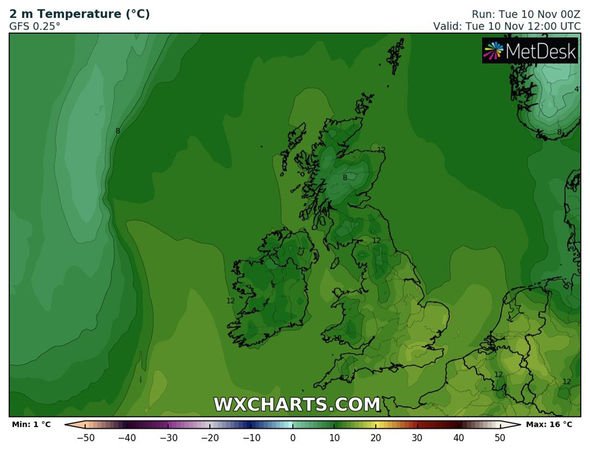 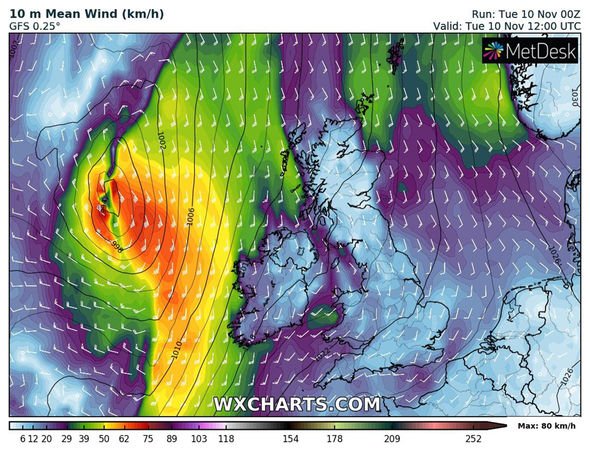 By midday temperatures are expected to stay mild, with the hottest parts of the UK being the south coast and Norwich at 14C (57.2F).

Similar conditions will be seen across the north, with the lowest temperatures recorded being 10C (50F) in Loch Rannoch.

Moving into Tuesday night and the country will continue to see settled weather, with cloud cover expected to last throughout the day.

But Northern Ireland is expected to begin seeing some of Wednesday’s downpour of rain early, with 9pm bringing heavier rains of up to 4mm an hour.

Throughout Wednesday night, an Atlantic plume of rain and winds will push its way across Northern Ireland and into Scotland.


Downpours will strike the northwest coast of Scotland by midnight, with all of Northern Ireland still soaking in the 4mm of rain an hour.


These conditions will last throughout the night, pushing into Glasgow and parts of western Scotland by 6am.


As 9am comes around Merseyside will also be drenched in the rain, with the downpours intensifying to up to 8mm an hour. 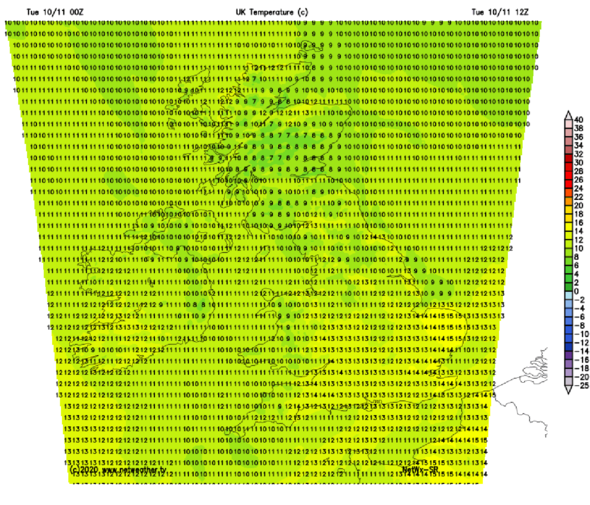 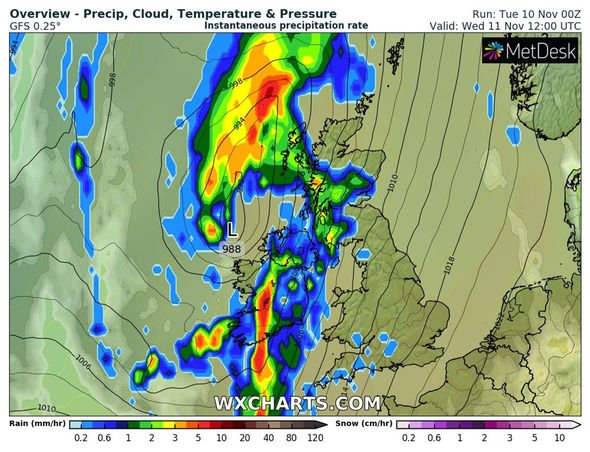 By 6pm the downpour will move away from the eastern-most parts of Northern Ireland, but will stroke the west coast of Wales and England in full.


The plume will then work its way eastwards throughout the night, easing up as it heads off of Norwich at 6am.


Conditions for Wednesday are expected to remain chilly as a result of the Atlantic breeze and high pressure, despite an average temperature of a mild 13C (55.4F).


Wind-speeds are also expected to ramp up with the rainfall, with 9am seeing the western parts of the UK blustered by 40mph gusts before moving eastwards with the rain.