Yellow weather warnings for heavy rain are in place throughout today for the west coast of Scotland, with the northern belt also effected. Along the west of north England, Northern Ireland and Wales downpours are also expected by the evening, with Atlantic pressure bringing cold winds and ferocious rainfall through the night. The western parts of the UK will stay mostly cloudy and dry throughout the morning, but as the night moves into Thursday, that Western Atlantic front will push its way eastwards over the UK, making it a wet night and early morning.

Aiden McGivern, Met Office meteorologist, said today will start to show unsettled weather, with it being “a wet and windy Wednesday for the northwest”.

He added, referencing the Atlantic plume bringing the rains: “This is weather front responsible for the unsettled weather, with plenty more weather fronts to come behind this one, but this is the first coming in against an area that is still high pressure centred over central parts of Europe.

“The rain building up throughout Armistice Day over the higher ground of western Scotland in particular, and a rain warning in force for western Scotland through to the Cairngorms, 50ml widely, 80ml in some of the more exposed spots of Dumfries St Galloway, that could cause issues, localised disruption due to standing water and so on.” 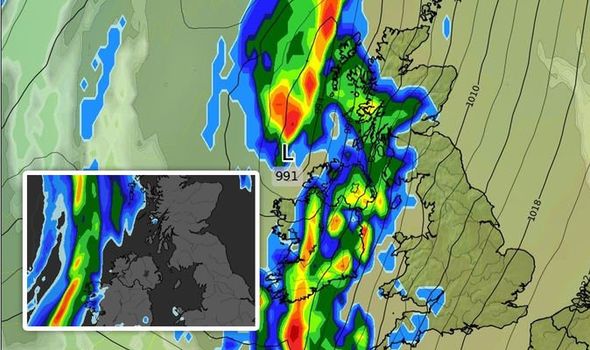 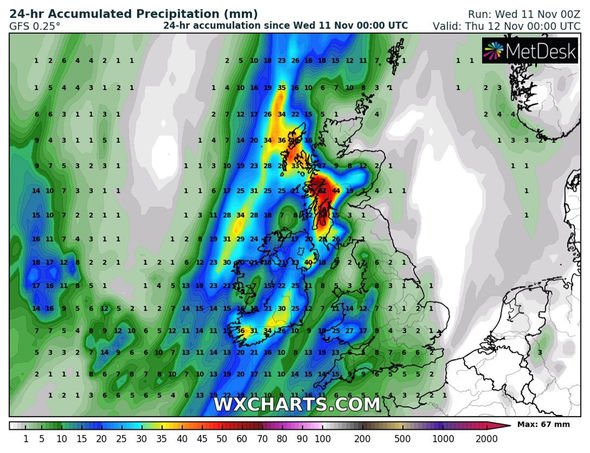 By 6am the front will have made landfall over the western coasts of Scotland and over Northern Ireland, making for a wet morning.

A maximum of 8mm of rainfall an hour can be expected to pour down on Belfast, as well as stretching across Glasgow up to Stornoway.

The soaking conditions are expected to last throughout the day, with midday seeing some respite for south-western parts of Scotland like Dumfries.

But heading into the evening and conditions are set worsen again with a second weather front pushing eastwards, bring up to 16mm of rain in Belfast, Londonderry and Loch Rannoch. 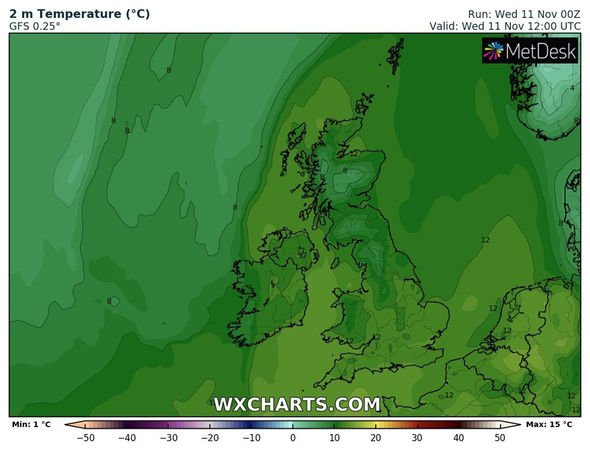 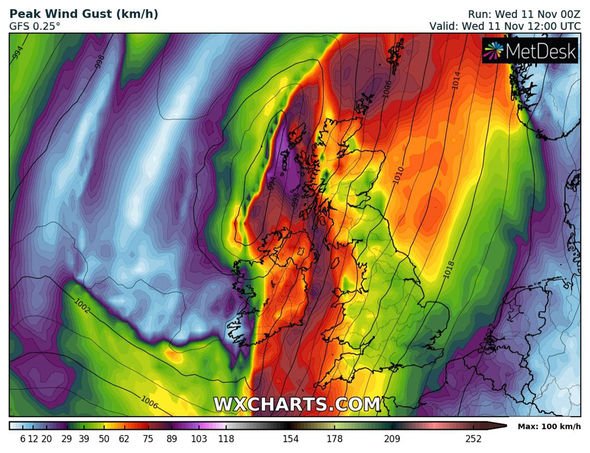 Much of the UK will avoid the wet weather for the day, with the east coast to Wales seeing a drier start to the day.

Parts of Wales could see intermittent bouts of showers, up to 1mm an hour, but much of the country will stay drier heading into the afternoon with temperatures at a mild 10C (50F) to 13C (55.4F).

Northwest England may see some of the morning’s rainfall push down, but only lightly with the same 1mm an hour lightly striking Merseyside.

Winds in most areas will also stay mild at an average of 18mph across the UK, with maximum gusts of 42mph being felt on the Welsh coast and the southwest.

But as the evening comes in, that second front will bring a huge wave of rainfall to the drier parts of the UK.

By 6pm, the western most parts of Wales and southwest England will be struck by heavier rains and stronger winds up to 25mph.

By 9pm the winds will ease but the front will have made landfall over much of Wales and the south west, with the heaviest rains expected to strike Cardiff and Plymouth along with Scotland and Belfast.

As the day ends, Northern Ireland and Wales, along with southwest England, should see the last of the 16mm an hour downpour as it pushes into central England and Scotland. 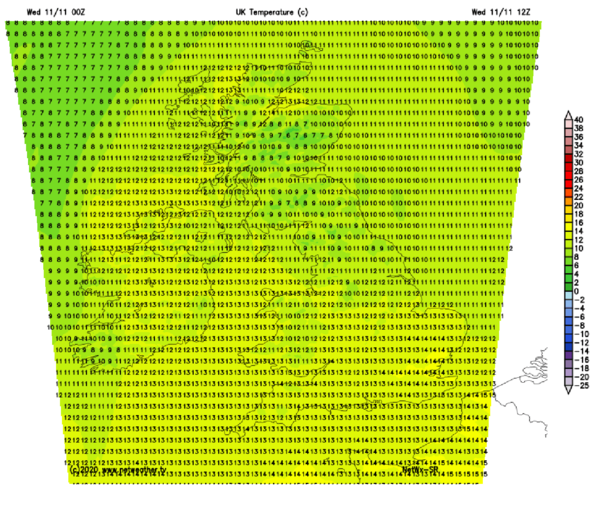 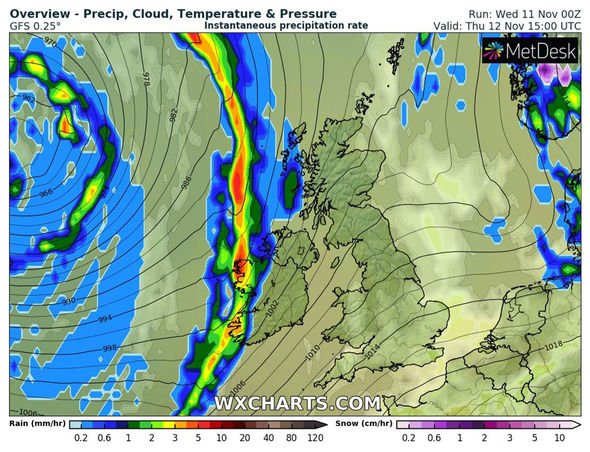 And by 6am that second front will have cleared most of the UK, with Norwich and Southend seeing less than 1mm of rain an hour as the morning comes in.

But another Atlantic front will begin developing just west of Northern Ireland, which is projected to head back across the northwest of Scotland.

Temperatures for Thursday though are expected to stay mild in line with the rest of the week, with most the UK staying in double digits at 10C (50F) to 13C (55.4F) again.