Severe cold weather is to strike parts of the country with intensely chilling temperatures anticipated until 9am on Thursday. The bone-chilling temperatures prompted Public Health England to issue a warning about the “severe cold weather conditions”. Authorities have issued several flood alerts and warnings for Wednesday with rain expected in some regions of the country.

The Met Office weather forecast for Wednesday advises cloudy conditions for many with some rain.

The forecast reads: “Cloudy and murky in east with some mostly light rain and drizzle.

“Some brighter or even sunnier spells moving eastwards for a time but thicker cloud with rain arriving in the west during the day. Rather cold.

“Generally cloudy with rain, mostly in west. Some heavier rain moving across south Wales and southwest England overnight.
“Winds strengthening for a time in west. Slight frost in east.” 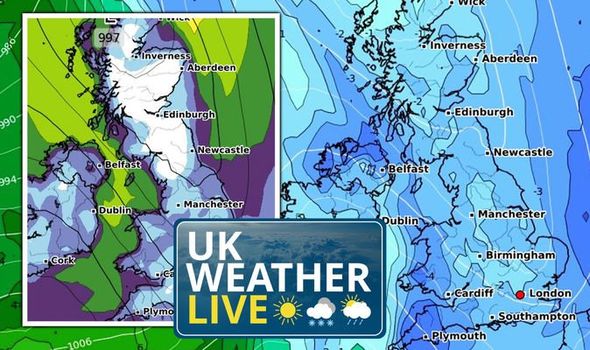 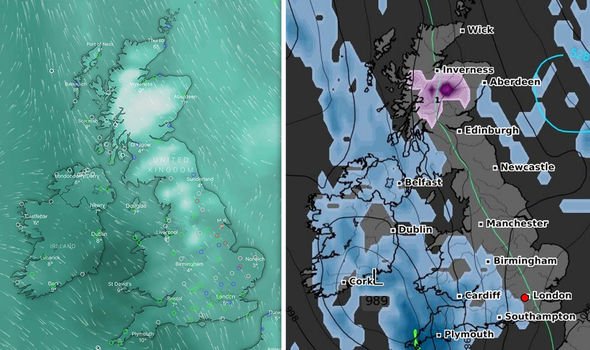 PHE public health consultant Dr Ishani Kar-Purkayastha warned people to keep their homes to heat their homes to at least 18C, particularly individuals with reduced mobility, aged 65 and over and those with any health condition.

She said: “Keep moving too if you can. Get up and walk around and spread housework throughout the day to help keep yourself warm.

“Food is also a vital source of energy so have plenty of hot food and drinks.”

7.25am update: Britain will be hit by a six-week deep freeze due to a polar bomb

A bitterly cold weather front from Greenland will bring snow and freezing fog to the UK this week.

Snow charts from WX Charts show a high chance of snow for at least 17 days in Scotland, right up to Christmas Day.

The days ahead of December 25 look likely to see the most intensely cold temperatures with -3C forecast on December 22 and 24.