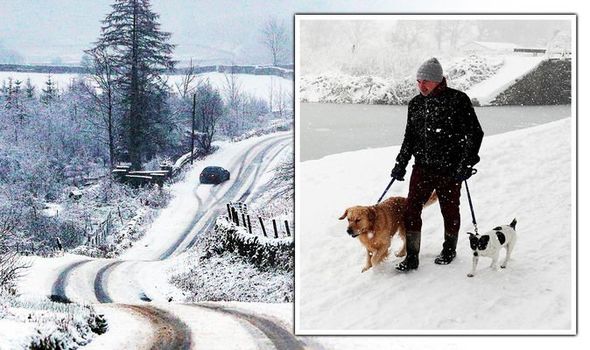 Significant snow events are forecast for parts of the country amid warnings London could be blanketed by mid-November. As thermometers start to dive from the mild autumn conditions so far, experts warn an early winter is gearing up to roar in.

James Madden, forecaster for Exacta Weather, said: “There are likely to be some large flirtations with cold temperatures throughout November.

“Widespread frosts and fog will be a common feature, and the possibility is there of a number of snow events across northern Britain.

“These may even reach as far south as the capital from mid-month onwards.

“November looks like delivering an early taste of extensive winter for many.”

Plunging solar activity with decreasing observation of sunspots are at the base of the icy predictions.

Cold weather will hold out into the first weeks of December which currently threatens more of the same.

Snow could turn widespread in the run up to the festive season raising hopes of a White Christmas.

Mr Madden added: “The cold shots from the back end of autumn are likely to continue into the first month of the meteorological winter.

“Cold is likely to be prevalent through much of the month, with any milder weather being restricted to a cluster of days during the first half of the month.

“Wintry weather and snow will accompany these cold conditions throughout the month too, and some notable snow events will be recorded across some large swathes of the country.

“Widespread and heavy snow showers are increasingly likely through the second half of December.

”It comes as temperatures plunge across the country prompting bookies to slash the odds on the coldest November on record.

With snow in the imminent forecast, Ladbrokes is offering 3-1 from 4-1 on this month entering the record books.

Spokesman Alex Apati said: “This month could well play host to the coldest November ever, with parts of the UK already preparing for snow over the coming days.”

While some long-range forecasters predict a polar winter blanketed in snow, government forecasters are more reserved.

However, the Met Office’s three-month contingency planner which covers the forecast until January, warns ‘cold weather-related impacts, such as snow’ are possible.

These are more likely during the start of the winter season, tying into predictions cold weather will strike within weeks.

The next three months will also see an increased risk of heavy rain and strong winds, particularly during the latter part, the Met Office said.

A spokesman said: “Despite a reduction in the chance of cold…impacts from snow, ice and fog remain possible, particularly during the early part of this period.

Independent forecasters Netweather veer towards colder predictions of temperatures during the next month dipping below average.

Towards the end of the month, cold blasts across the UK will be driven by high-pressure blocking patterns over Greenland.

“Continued blocking over and to the west of Greenland has potential to bring cold northerly and or north-westerly outbreaks to the British Isles.

“However, it is unclear if those northerly and north-westerly outbreaks will hit the British Isles directly or if they will be centred to the west or east of Britain, resulting in Britain getting rather less cold air masses.

“Overall, the most likely outcome is below-average temperatures, but with some uncertainty over whether they will be substantially below average or just near to slightly below average.”

Get the latest three-day weather forecast where you live. Find out by adding your postcode or visit InYourArea

Britain’s weather could fall to the influence of a La Nina cooling pattern of the Pacific Ocean off the coast of South America.

The counterpart to El Nino, La Nina can have significant effects on the weather across the world and impact on seasonal conditions in the UK.

A Met Office spokesman said: “[There may be a] weak to moderate La Nina event, which increases the likelihood of northerly or north-westerly winds early in the period.”

Jim Dale, meteorologist for British Weather Services and author of Weather or Not? said: “The effects of La Nina are more pronounced in America, although it can have some impact on the UK.