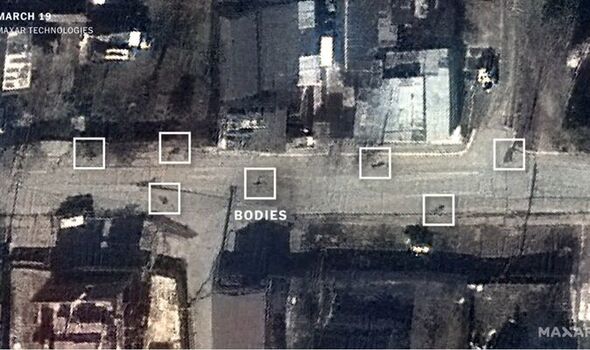 As the Russian invasion of Ukraine enters its sixth week and apparent war crimes emerge, Poland’s deputy Prime Minister Jaroslaw Kaczynski is discussing new measures including housing nuclear weapons as well as calling for a 50 percent increase in the number of US troops stationed in Europe. Mr Kaczynski explained the increase in defence would be in response to “increasing aggressiveness” from Vladimir Putin. His comments come after Russian troops left a trail of horror after withdrawing from the Bucha district, northwest of Kyiv. Local leaders and journalists reported seeing scores of civilians killed in the area, some executed with their hands tied behind their backs. Ukraine’s president, Volodymyr Zelensky, said the Kremlin-ordered attack on his people amounted to genocide. Boris Johnson described the attacks as “despicable”, branded Putin as “desperate” and vowed to step up sanctions in response.

Boris Johnson has attacked President Vladimir Putin after it emerged Russian troops massacred civilians in the Bucha region, near Kyiv.

The Prime Minister said: “Russia’s despicable attacks against innocent civilians in Irpin and Bucha are yet more evidence that Putin and his army are committing war crimes in Ukraine.

“No denial or disinformation from the Kremlin can hide what we all know to be the truth – Putin is desperate, his invasion is failing, and Ukraine’s resolve has never been stronger.

“I will do everything in my power to starve Putin’s war machine. We are stepping up our sanctions and military support, as well as bolstering our humanitarian support package to help those in need on the ground.

“The UK has been at the forefront of supporting the International Criminal Court’s investigation into atrocities committed in Ukraine, and Dominic Raab has authorised additional financial support and the deployment of specialist investigators – we will not rest until justice is served.”

Good morning from London. I’m Tara Fair, I’ll be bringing you all the latest developments on the war between Ukraine and Russia. Please feel free to get in touch with me as I work if you have a story or tips to share! Your thoughts are always welcome.