A shock report lays bare how much it cost to hire external consultants for the Ministry of Defence, while Ursula von der Leyen served as Germany’s defence minister. A committee inquiry found the “de facto complete failure” of the Ministry of Defence in dealing with advice and support is “not only a problem at the working level, but is also to be attributed to Dr. von der Leyen”.

The defence ministry have been accused of possibly being in breach of public procurement law after they spent hundreds of millions of euros on external consultants while she was defence minister in between 2013 and 2019.

Ms von der Leyen, who is now European Commission President, has vehemently denied personal liability but admitted mistakes in the multi-million contracting scandal during her stint as defence minister.

She previously told MPs in the Bundestag, the German parliament:“Irregularities in the awards procedure occurred. 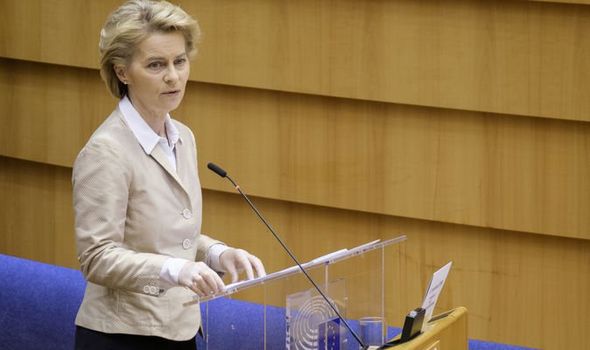 “It is all the more regrettable that mistakes were made. There were violations of the provisions guarding the awarding of contracts.

“The involvement of external parties did not always proceed correctly.

“That should not be allowed to happen.”

An investigation was launched into a contract awarded to McKinsey and a €390 million IT contract handed to another company that failed to pass through the company’s supervisory board as required.

It will also investigate whether Ms von der Leyen committed nepotism by hiring Katrin Suder, a former McKinsey consultant, as her deputy to oversee the ministry’s arms procurement section.

But Ms von der Leyen insisted the ministry had taken quick measures to deal with the issues identified by the Federal Audit Office.

She added: “A lot of good was achieved.”

She said: ”I believe that she also overreached.”

“Not knowing does not release you from responsibility.”