US solider accused of planning attack on own unit 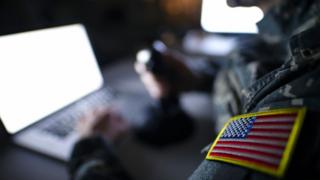 A US solider has been charged with terrorism offences for planning a deadly ambush on his unit by sending information to a neo-Nazi group.

Ethan Melzer, 22, stands accused of sending sensitive details about his unit to the Order of the Nine Angles.

The US Department of Justice calls it an “occult-based neo-Nazi and racially motivated violent extremist group”.

He was allegedly planning for information to be passed to jihadists, who would then carry out an attack.

His plan was thwarted late last month by the FBI and the US army. He was arrested on 10 June.

Private Melzer enlisted in the US Army in December 2018 and began his active service in June 2019.

“As alleged, Ethan Melzer, a private in the US Army, was the enemy within,” said Audrey Strauss, acting US Attorney for the Southern District of New York, in a statement.

“Melzer allegedly attempted to orchestrate a murderous ambush on his own unit by unlawfully revealing its location, strength, and armaments to a neo-Nazi, anarchist, white supremacist group.”

He is accused of planning to provide information intended to be conveyed to jihadist terrorists, she added. He allegedly exchanged communications regarding passing information about an anticipated deployment of his unit to a purported member of al-Qaeda.

Members of the Order of Nine Angles, also known as O9A, have expressed admiration for both Nazis, such as Adolf Hitler, and Islamic jihadists, such as Osama Bin Laden, the statement said.

“Melzer declared himself to be a traitor against the United States, and described his own conduct as tantamount to treason. We agree,” said FBI Assistant Director William F. Sweeney Jr.

“He turned his back on his county and his unit while aligning himself with members of the neo-Nazi group ONA. Today, he is in custody and facing a lifetime of service – behind bars – which is appropriate given the severity of the conduct we allege today.”

UK anti-racism campaigners Hope Not Hate used its annual State of Hate report to call for the Order of Nine Angles to be banned.