Tash Peterson, 26, was served a Barring Notice by Western Australia Police after she ambushed families at a seafood restaurant calling them “animal abusers” in a “fish holocaust”. Now, she is not allowed in any licenced venue across the state, including pubs and restaurants. If she steps foot in any WA venue where alcohol is sold, she will be trespassing and will face a fine of AUD $10,000 (£5,400).

The move comes after Ms Peterson and a group of activists stormed the Bathers Beach House restaurant in Perth on May 2.

Ms Peterson stood on a table and screamed: “Right now, in this moment, there are billions of fish, dolphins, whales and other marine animals being ripped from the ocean, in massive trawler nets and they are suffocated to death.

“This is the largest holocaust in history. 2.7 trillion fish are brutally murdered each year for human consumption. If you are not a vegan you are an animal abuser.” 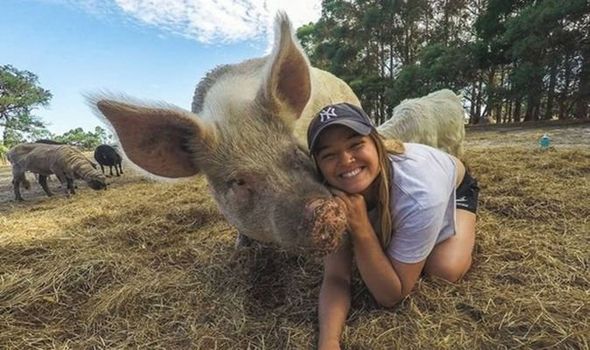 Staff tried to get to get the activists to leave but Ms Peterson continued to yell “animal abusers” at confused diners who repeatedly told her to “shut up”.

Speaking about the legal action taken against her, Ms Peterson said: “The police came to my house to serve a Barring Notice for a sea life Seaspiracy protest that I did last month highlighting the sea life holocaust caused by the fishing industry.

She also added that she had received another banning notice after she invaded the pitch at an AFL game.

In an Instagram video, Ms Peterson said that she will now move somewhere else in Australia to continue her activism. She said: “Guess what, WA? I’m getting the f*** out of here anyway so I can continue to do my protesting in other states in places that sell alcohol.

“I’m probably going to be over east in one month’s time and I’m flying out on Monday.”

She has built up a large social media following, many of whom offered their support after hearing the announcement.

One person said: “So because you protest and speak your mind, you can’t even go to your local supermarket?! Just because it sells alcohol!”

Another added: “I had no idea there was no freedom of speech in West Australia. What a shame.”