Earlier tonight, police in Austria rushed to a synagogue in Vienna following reports of a shooting. Footage posted on social media showed people scrambling for cover as shots can be heard in the background. 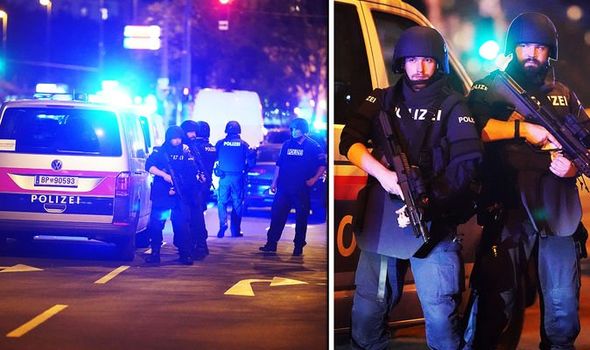 Now, reports are claiming hostages are being held in the Akakiko restaurant.

According to SV News, more hostages are being held in a Hilton hotel as reports from the chaotic scenes begin to emerge.

Terrifying footage shared on social media showed people running for cover as shots were fired in the city.

A man can also be seen shouting while sirens go off.

Several people have been injured in the attack, including a police officer who suffered gunshot wounds.

Interior Minister Karl Nehammer said: “At the moment I can confirm we believe this is an apparent terror attack.

“We believe there are several perpetrators.

The interior ministry said one suspect had been arrested, APA reports.

Two people have been killed and several injured in a shooting in central Vienna, a spokesman for the ambulance service said on Monday.

The spokesman declined to comment on the identity of the dead person or where the person was killed.

There are six locations in Vienna attack according to state broadcaster, ORF.

All the locations are in the immediate vicinity of the street housing the central synagogue, an interior ministry spokesperson said.

Jewish community leader Oskar Deutsch tweeted that it was unclear if the Vienna synagogue was targeted in the attack as it was closed at the time.

He tweeted: “It cannot be said at the moment whether Stadttempel was one of the targets.

“What is certain, however, is that both the synagogue in Seitenstettengasse and the office building at the same address were no longer in operation and closed at the time of the first shots.”

The Prime Minister of the Netherlands, Mark Rutte, has tweeted his support for Austria at this terrifying time.

He wrote: “A terrible attack near a synagogue in Vienna.

“I have just conveyed full solidarity from the Netherlands to @sebastiankurz.

“Our thoughts are with the victims and their families, and with the Austrian government in dealing with this heinous act.”

French President Emmanuel Macron tweeted: “We, French, share the shock and sadness of the Austrians after an attack in Vienna.

“After France, it is a friendly country that is under attack.

“This is our Europe. Our enemies need to know who they are dealing with.

“We won’t give in to anything.”