Home » World News » What is QAnon, the conspiracy theory spreading throughout the US

The far-right QAnon conspiracy theory has made waves in this election after US President Donald Trump’s acknowledgement of its adherents in August and an increase in Republican and independent congressional candidates embracing the movement, which many consider a mad hoax or even a cult.

Followers believe a high-ranking, anonymous government official called “Q” is providing top-secret information in internet posts about a cannibalistic, satanic cabal of “Deep State” actors engaged in a child trafficking ring that Trump has been chosen to dismantle.

Some also believe the conspirators are extracting chemicals from the children’s blood to extend their lives.

But this is only the core of the conspiracy theory, which spreads and subsumes further conspiracies.

The identity of Q – presumed to be called as such because those with “Q clearance” at the Department of Energy can view classified information – is unknown, though they are assumed to be a United States citizen.

Given the subject matter, Q’s information surfaced on the darker corners of the internet. Q made their first revelation or “drop” in October 2017 on 4Chan, a controversial imageboard, or online forum that revolves around posting images, often with accompanying text and discussions.

The post was named “Calm Before the Storm”, the storm being an event in which 100,000 politicians, business people and celebrities involved in the central plot will be gathered and held accountable.

The anonymous user has accused liberals of various stripes of being involved in the plot, including former President Barack Obama, former Secretary of State Hillary Clinton and liberal financier George Soros, causing accusations of anti-Semitism.

Celebrities and members of the media, too, are said to be involved.

Other posts are more cryptic, seemingly providing clues to a larger puzzle surrounding the plot to foil Trump, who was recruited by top military brass to run for president in 2016 to stop the satanic, child-trafficking cabal. 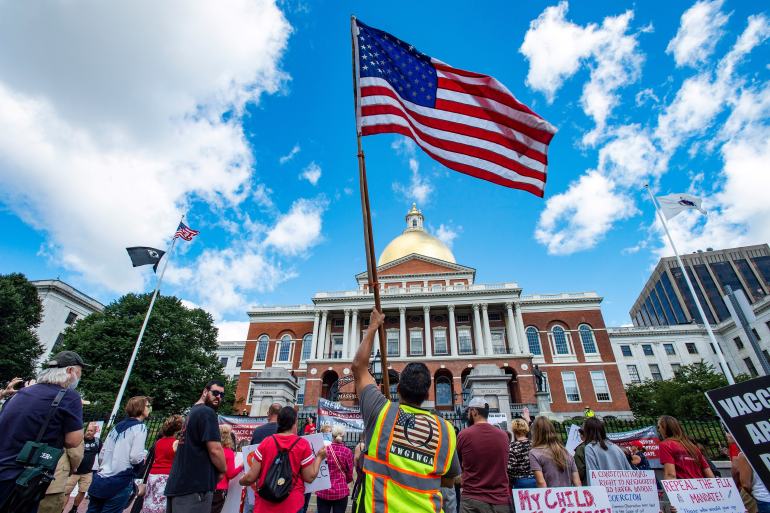 The QAnon conspiracy movement has exploded from the US political fringe into the global mainstream during the COVID-19 coronavirus pandemic [File: Joseph Prezioso/AFP]Q’s messages moved to 8chan, another imageboard with links to white supremacy and child pornography and then to 8kun, 8chan’s successor.

Q’s information is not limited to the satanic, child-trafficking cabal of liberal elites. It has united various conspiracy theories, such as UFOs, Area 51 and faked-death plots.

Kennedy died in a plane crash, following the assassinations of both his father in 1963 and his uncle, Robert F Kennedy, in 1968 during his campaign for president. All of these deaths were major events in US politics and have their own set of years-old, surrounding conspiracies. 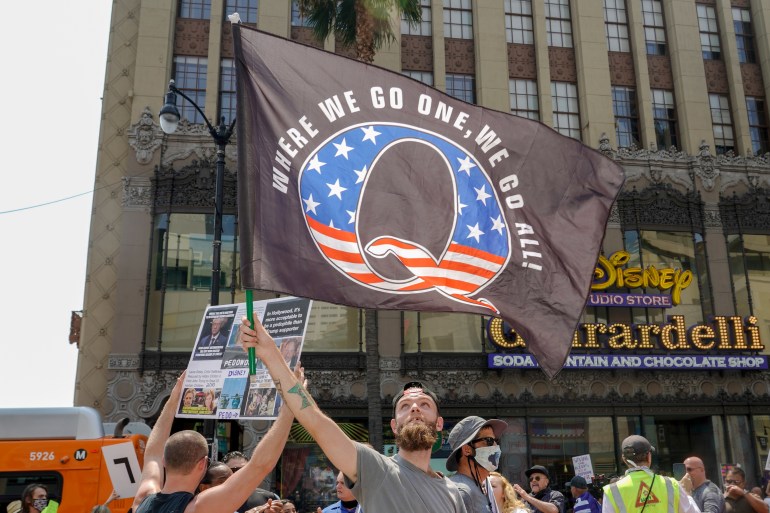 QAnon demonstrators protest against child trafficking at a demonstration on Hollywood Boulevard in Los Angeles, California [File: Kyle Grillot /AFP]A recent theory it has subsumed is that of PizzaGate, a 2016 conspiracy theory that claimed Democrats were running a child trafficking ring out of a popular pizzeria in Washington, DC.

A man from North Carolina travelled to the pizzeria and opened fire with a rifle after delving into the theory. No one was killed.

It’s unclear how many people ascribe to the far-reaching, far-right theories – and how seriously – but they have made their presence known both online and in real life.

Facebook groups dedicated to the theory have millions of followers, according to documents resulting from an internal review seen by NBC News.

Believers of the hoax have been linked to violence and plots to harm infrastructure and people, including the targeting of Democratic presidential candidate and former Vice President Joe Biden and the killing of a Gambino crime boss on Staten Island.

Adherents began showing up at Trump campaign rallies in 2018 and continue to be sighted at these events.

Michael “Lionel” Lebron, a prominent supporter and promoter of the theory, was granted a photo with the president inside the Oval Office in August of that year.

Vice President Mike Pence was then photographed having a jovial conversation with members of the Broward County, Florida, SWAT team in November 2018. One of the law enforcement officers was wearing a patch associated with the theory.

Members of the Trump administration have condemned the group, but Trump himself defended adherents at a news conference in August.

“I heard that these are people that love our country”, Trump said in his first public comment on the subject. “So I don’t know really anything about it other than they do supposedly like me.”

Trump also congratulated Marjorie Taylor Greene, who has voiced support for QAnon, after she won a Republican congressional primary contest in Georgia that month.

A theory, movement, or a cult?

QAnon and its complicated web of conspiracies are fast-growing in Europe, according to researchers.

“We are witnessing the adaptation of these theories into EU-centered – or even local – narratives, where they merge with pre-existing conspiracies and groups,” NewsGuard, a fake news monitor said in a July report.

While many refer to QAnon as a conspiracy theory, and some of its adherents refer to it as a movement, some observers are increasingly calling it a “cult” for its adaptability, its effect on the way people view reality and sense of unity among followers.

QAnon’s slogan, “Where We Go One, We Go All” or WWG1WGA has frequently been seen at recent right-wing demonstrations.

“I have just started describing QAnon as a digital cult instead of a conspiracy theory … I actually think it’s more accurate,” Aoife Gallagher, a disinformation and extremism analyst at the London-based Institute for Strategic Dialogue told USA Today.

“Cult” or not, with at least 24 congressional candidates publicly supporting the theories and Trump praising them, QAnon seems poised to remain a player in US politics – and possibly abroad – for years to come.