Home » World News » What is the weather today – is it going to rain?

October so far has lived up to the autumn season, full of rain, strong winds and colder weather. Temperatures are forecast to dip even further in the coming days, with many already reaching for winter coats and scarves.

Cold weather is on the way for much of the UK in the next few days, with temperature maps turning blue from the cold.

The Met Office tweeted: “Temperatures are set to tumble as we head towards the end of the week.

“Even some southern areas may dip close to freezing by Friday night, with a risk of a fairly widespread grass frost across much of the country.”

There could even be some snow settling over the Highlands in the coming days, with a cold front setting in ready for the weekend. 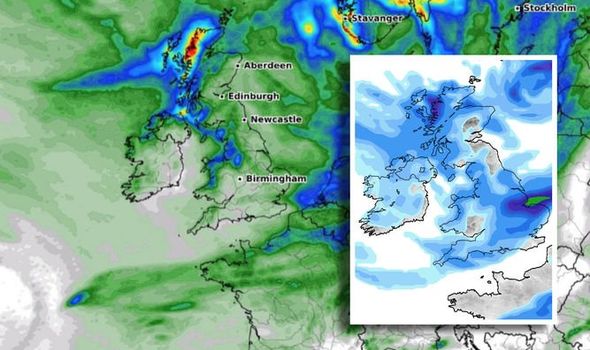 Maps from the Met Office show heavy rain and clouds across much of the UK, with some sunshine peaking through.

Heavy showers can be seen on Friday morning across York, Peterborough, Swindon and Cardiff, with some hail impacting Belfast. 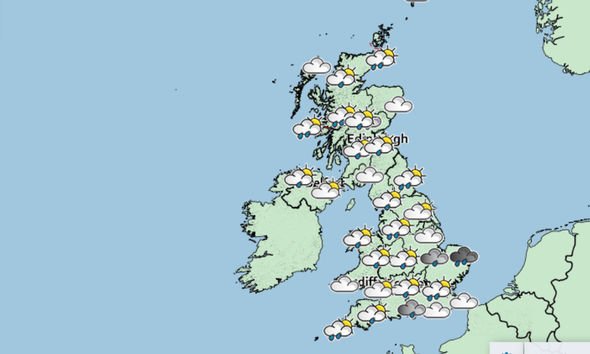 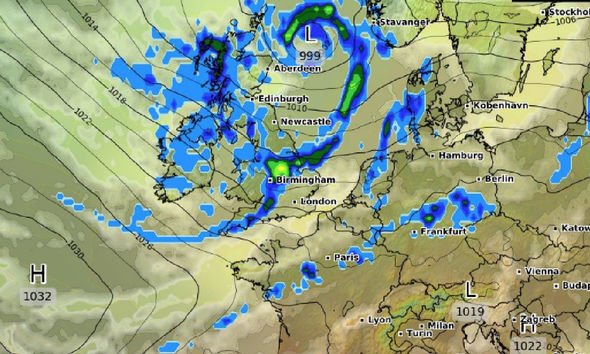 However the rain should dissipate into Friday night, with much of the country seeing clear skies overnight.

Temperatures will be rather cool all day, with up to 14C in the south of England, 10C in the Midlands and North of England and 9C in Scotland.

The Met Office forecast for Friday reads: “Band of showery rain continuing southeast to clear the far southeast by evening.

“Sunny intervals and heavy, blustery showers elsewhere, wintry on hills of the north. Windy and cool.”

As we head towards the weekend, Netweather forecasters say there will be low pressure in the North Sea.

This will continue to feed northwest winds across the country, so it won’t feel especially warm anywhere.

Temperatures will linger around 10C and colder for much of the north of England and Scotland.

Showers on Saturday will still be quite widespread, maybe with one or two bands of them working their way from northwest to southeast. 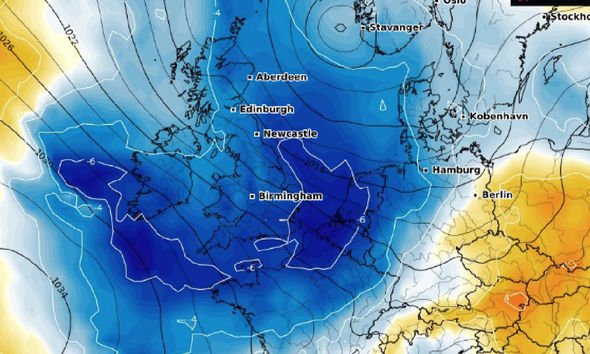 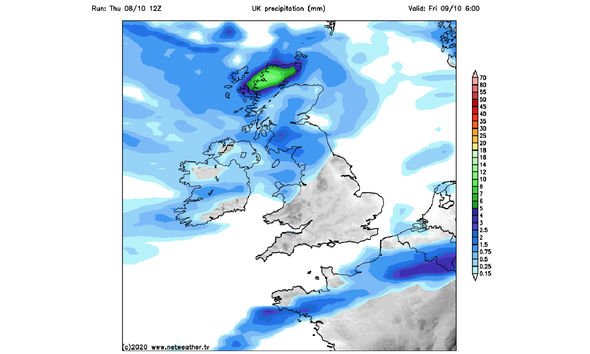 However, Netweather forecasters say: “But with high pressure just nudging in closer from the west and the low easing further east by Sunday, they’re likely to become more confined to the coasts with most inland regions staying dry with some long sunny spells.

“The wind should be a touch lighter inland on Sunday too, so although maxes of 9C to 14C don’t sound too exciting, it should feel a bit warmer than recently.

“If you’re planning a walk on the beach though, especially on the east coast, it’ll most likely be quite bracing!”

Heading into next week the Met Office forecast for Tuesday, October 13 through to Thursday, October 22 reads: “Tuesday looking to be generally a mix of sunny spells and scattered showers across the UK, with heaviest and most frequent showers likely in the east.

“However, from Wednesday the unsettled conditions may make way to leave many areas fine and settled for the remainder of the week.

“Some showers may affect the southeast at times and the far northwest may be cloudier, perhaps with some periods of rain, otherwise many places will be largely dry.

“Temperatures are generally expected to be rather cold or near normal, with increasing likelihood of overnight frosts.

“The settled weather also brings an increased risk of overnight fog and frost, with fog potentially slow to clear and lingering well into the daytime.”