What to Cook This Week

Start with a Times classic: Marian Burros’s recipe for a delicious plum torte. 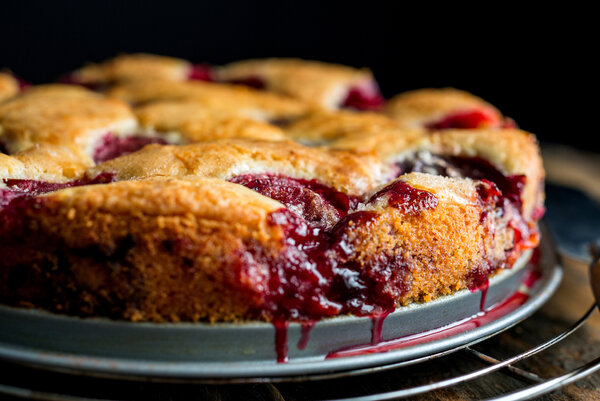 Good morning. The New York Times published Marian Burros’s recipe for plum torte (above) in 1983, and did so again every September for six years. Requests for copies of that recipe continued to flood in through the 1990s, but it wasn’t until the birth of New York Times Cooking in the fall of 2014 that we could give it a permanent home. It’s a true taste of the shoulder season between summer and fall, and one of the greatest easy desserts of all time, a perfect Sunday project. Please make it with whatever fruit you can manage today, and raise a glass to Marian when you do. We walk in her footsteps every day.

After, you can cook dinner: Maybe a simple spaghetti with tomatoes and butter? Or Amu’s chicken korma, a recipe that Sohla El-Waylly learned from her mom, gently spiced and enriched with yogurt instead of cream or nuts. Perhaps an omelet, filled with whatever you find in the refrigerator? For me, that’s a slice of deli ham and a big dollop of leftover Brie.

For Monday’s dinner, how about pasta with creamy herb sauce? It’s a neat way to use up leftover fresh herbs, steeping them in cream to make a simple sauce that coats pasta and leafy greens. That makes for a cozy meal, as Isabel Gillies would say.

Tuesday, I’m thinking, could be good for one-pot Japanese curry chicken and rice, which I like with quick pickles to provide a zing against the richness.

On Wednesday, try an assemblage as much as a recipe: these Indian-ish nachos with Cheddar, black beans and chutney. “Amazing!” wrote one of our subscribers in a note below the recipe. “A flavor sensation!”

I like the idea of kalpudding for Thursday night, a Swedish meatloaf situation with deeply caramelized cabbage, delicious with lingonberry preserves, cranberry sauce, currant jam, anything tart and sweet.

And then on Friday, you can run out the week with a showstopper of roasted salmon with thin-sliced potatoes and a horseradish-tarragon sauce. Then serve an apple skillet cake with salted caramel frosting for dessert to show you are really, truly, not messing around.

There are many thousands more recipes you might cook this week waiting for you on New York Times Cooking. (Not to put too fine a point on it: You need a subscription to access them. Subscriptions are what allow this dance to continue. If you haven’t already, please subscribe today.) And you can find further inspiration on our Instagram and YouTube channel.

We’ll be standing by like lifeguards at Las Salinas in Ibiza, should you find yourself in a technological rip current, or under a culinary wave. Just signal: [email protected] Someone will swim out to you. (You can also wave to me: [email protected] I read every letter sent.)

Now, it’s nothing to do with lamb belly or sushi-grade yellowfin tuna, but 10 years ago today, the relief pitcher Mariano Rivera of The New York Yankees became Major League Baseball’s all-time saves leader, with 602. My friend and colleague Ben Hoffman was there to record the Sandman’s stat, and to tell the story. (Rivera recorded an additional 50 saves before retiring in 2013.)

Here’s Spencer George in The Bitter Southerner, on how artists in Charleston, S.C., are responding to climate change.

Reading: “Fuzz: When Nature Breaks the Law,” by Mary Roach, funny and smart.

The Times’s virtual event series, “Black History, Continued” continues this afternoon with “Black in Bloom,” an exploration of Black life in the great outdoors with our Veronica Chambers in conversation with, among others, the forager Alexis Nikole Nelson, the chef Bryant Terry and the poet and artist Precious Okoyomon. It’s at 2 p.m., Eastern Standard Time, and open to all. Register here to attend.

Finally, here’s Salif Keita to play us off, “Africa.” Listen to that while you’re cooking, and I’ll be back on Monday.