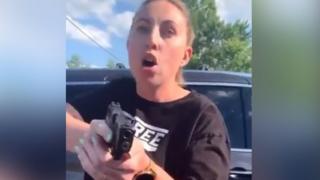 A white husband and wife have been charged after the woman pulled a gun on a black mother and her children during a confrontation in a car park.

Footage of the incident in Orion Township, near Detroit, has been viewed millions of times on social media.

It shows Jillian Wuestenberg pointing the cocked gun and shouting: “Get away.”

Local Sheriff Michael Bouchard said the confrontation had stemmed from a “bump” at the entrance to a restaurant.

The Wuestenbergs have both been charged with felonious assault. They each had a loaded firearm, the sheriff said. The black family was not armed.

Ms Wuestenberg, 32, is alleged to have bumped into 15-year-old Makayla Green, whose mother Takelia Hill then demands an apology. Both she and her daughter are filming.

Ms Wuestenberg gets into her vehicle, driven by her husband Eric, 42, but the argument escalates and she reappears brandishing a gun and pointing it at Makayla and her mother.

Several people called the police and the couple were arrested, Sheriff Bouchard said. 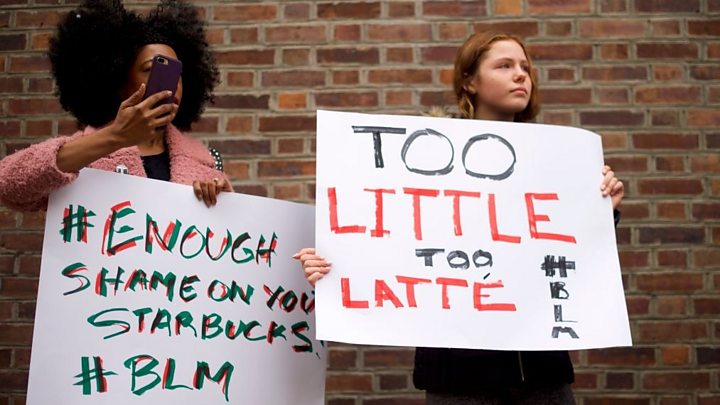 “Let’s have a little more tolerance for each other and not being so quick to react,” he told a news conference. “If someone is doing something improper or unfair, I tell my family and friends to look away. This is not the moment to plant your flag.”

Oakland County Chief Executive David Coulter said he had been “deeply disturbed” by the incident on 1 July.

“This behaviour is unacceptable. I wholly expect the prosecutor to bring charges that reflect the severity of the incident.” he said.

What happened during the argument?

Makayla Green told the Detroit News that she had been bumped by Ms Wuestenberg.

“Before I could walk into Chipotle, this woman was coming out, and I had moved out the way so she can walk out,” she told The Detroit News.

“She bumped me, and I said, ‘excuse you’. And then she started cussing me out and saying things like I was invading her personal space.”

Makayla then called her mother over because she was scared, she said.

The footage shows the argument continuing during which Ms Wuestenberg is accused of being racist.

“White people aren’t racist… I care about you, and I’m sorry if you had an incident that has made someone make you feel like that. No one is racist,” she says.

When the car begins reversing, Ms Hill is behind it and knocks on the back of the car. Ms Wuestenberg then jumps out and shouts “get back” and “back up” along with several expletives.