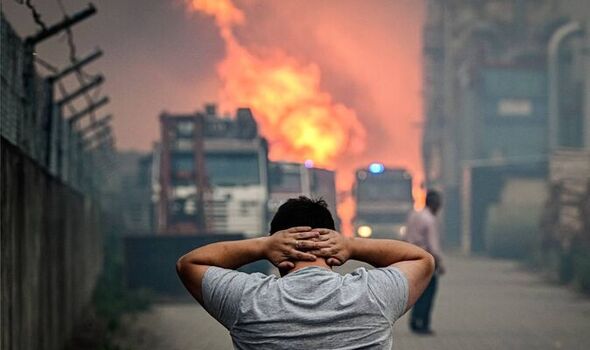 Since last Sunday, tinder-dry countries has been baked by scorching temperatures above 104F (40C), causing sweeping wildfires on parched farmland and dry forests.

On Tuesday, Alvega recorded the highest air temperature in Portugal of 112F, with 15 percent of the country above 107F.

Now 3,500 firefighters in Portugal are battling dozens of blazes, as temperatures break records across the country.

In Leiria 600 people had to be forced out of their homes, triggering terrifying memories of the deadly wildfires of 2017 which killed more than 100.

Farmer Adelino Rodrigues, 77, of Leiria, said that “everything burned”, adding: “It looked like the end of the world.”

Portuguese Prime Minister Antonio Costa said: “It is crucial we avoid new events – it leads to the exhaustion of firefighters and all others doing their best to control the situation.”

In Spain, a fire that started in the Extremadura region on Tuesday swept into Salamanca province in the region of Castile and Leon, forcing the evacuation of 49 children from a camp yesterday.

The Iberian Peninsula has been on high alert, while the Andalusian town of Almonte hit 114F on Wednesday.

In France, 1,000 firefighters are trying control two major wildfires in the south-west of the country which have already burned 4,000 hectares. “The fires are still not under control,” the Gironde department said.

On Croatia’s Adriatic Coast, firefighting planes dumped water over burning forests and troops were called in to help firefighters battling to contain three major wildfires around Zadar and Sibenik.

Meanwhile, in Turkey, 3,000 people have had to be evacuated due to a wildfire in the south-western Datca peninsula.

Scientists say human-caused climate change has increased the frequency of extreme weather such as heatwaves, which have also hit parts of China and the US in recent days.

“Europe is very much affected by changes in atmospheric circulation,” said Kai Kornhuber, a climate scientist at Columbia University.