Wildfires Threaten Urban Water Supplies, Long After the Flames Are Out

BELLVUE, Colo. — Wrangling a 25-foot-long tube of straw up a steep hillside studded with charred pine trees, three volunteer workers placed it in a shallow trench that had been dug along the slope.

Locked in place with wooden stakes, the sausage-like tube was part of an effort to avoid a potentially large and long-term problem with the drinking water for hundreds of thousands of people to the east. The tube, with others above and below it, should help prevent the hillside, made unstable last fall by a large wildfire, from choking the water supply with sediment when the thunderstorms known as monsoon rains arrive as expected this summer.

“The purpose of these things is to slow the water down and keep the soil,” said Tamara Astvatsaturova from a group called Wildlands Restoration Volunteers, who was advising the workers. Otherwise, much of the soil, accompanied by ash, burned tree limbs, rocks and other debris, could end up in the South Fork of the Cache la Poudre River, several hundred yards away.

The daylong project at the Lazy D Ranch, private land surrounded by the Roosevelt National Forest, will help lessen the effects on the river from 2020’s Cameron Peak Fire. The Poudre is a major source of water for Fort Collins, Greeley and other communities and farms.

When wildfires blaze across the West, as they have with increasing ferocity as the region has warmed, the focus is often on the immediate devastation — forests destroyed, infrastructure damaged, homes burned, lives lost.

But about two-thirds of drinking water in the United States originates in forests. And when wildfires affect watersheds, cities can face a different kind of impact, long after the flames are out.

In Colorado’s Front Range, erosion from fire-damaged slopes during the summer rains could turn the flow of the Poudre and its tributaries dark with sediment, dissolved nutrients and heavy metals, as well as debris. This could clog intake pipes, reduce the capacity of reservoirs, cause algal blooms and cloud and contaminate the water, sharply raising maintenance and treatment costs. In the worst case, the water would be untreatable, forcing the cities to use alternate supplies for a time.

But even that could be problematic. That’s because the other major water source for Fort Collins and other communities, the Colorado-Big Thompson watershed, has also been affected, by a different fire last fall. “We’ll be looking at impacts to both of our supplies,” said Jill Oropeza, the water quality services manager for Fort Collins, population 165,000. 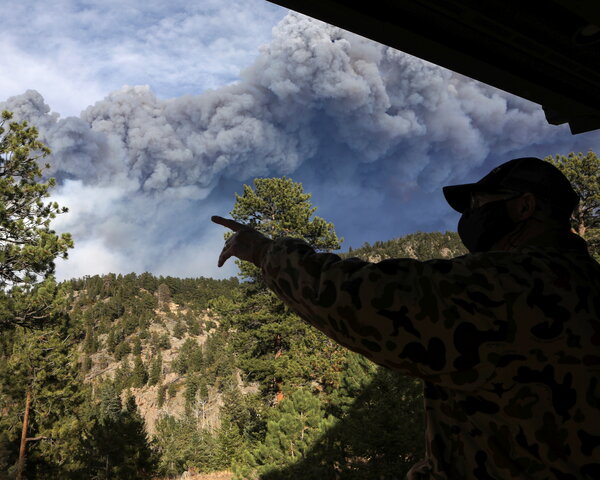 In both watersheds, much more work — and at a much larger scale than the project at the Lazy D, including spreading mulch and seed from helicopters — will be needed to prevent the water systems from being inundated with sediment. Much of the fire damage occurred on national forest or other federal land, so government agencies have also been involved.

The work is expensive. In the Colorado-Big Thompson watershed, an estimated $35 million is needed for restoration on private lands alone. In both watersheds, utilities, municipal water managers, lawmakers, conservation groups and others are scrambling to find the needed money, through government programs and grants and donations from businesses, foundations and other groups. So far they have come up well short.

They are also racing against time. The Cameron Peak Fire, the largest in Colorado history, wasn’t fully contained until early December, so little could be done before the winter snows came. More recent snowfalls delayed the start of work this spring.

“We’ve got a month to two months to do as much work as we possibly can in advance of those big monsoon rains,” said Jennifer Kovecses, who until this month was executive director of one of the groups involved, the Coalition for the Poudre River Watershed. “But at the end of the summer we’re probably still going to have some black water coming down the river.”

Much of this year’s water supply for Fort Collins and other communities was stored over the winter, in large reservoirs near the cities, so it remained unaffected by post-fire runoff.

It’s next year, and the years to follow, that really worry water managers. “We’re going to be dealing with this for, people say, five to 10 years,” said Esther Vincent, director of environmental services at Northern Water, the utility that operates the Colorado-Big Thompson project.

One reason is that, as sediment erodes off hillsides and enters rivers, not all of it immediately makes it downstream to affect reservoirs and treatment plants. Much of it settles out along the way, accumulating in river banks, flood plains and other areas where the water slows. Summer storms in following years can flush and stir up this sediment, which is then carried downstream, causing new problems.

The costs of additional water treatment or other measures can be enormous. A fire in 2016 in and around Fort McMurray, Alberta, resulted in about 9 million Canadian dollars (about $7.3 million) in additional treatment expenses. And after a 2002 fire in a watershed that supplies Denver led to an estimated 1 million cubic yards of sediment flowing into reservoirs, the price tag to dredge one of them totaled $30 million.

Beyond water quality, fires can have even longer effects on the availability and timing of water supplies, said François-Nicolas Robinne of the Canadian Forest Service. Less rainwater is absorbed by burned slopes, he said, and growth of new vegetation as the forest recovers consumes more water.

These shifts “can create issues in terms of water allocation for the different users downstream,” Dr. Robinne said.

As climate change helps make wildfires burn hotter and longer, the risks to water supplies grow. But most people don’t think about the risks, said Kevin Bladon, a hydrologist at Oregon State University, even after a damaging fire.

“Here we are in 2021,” he said. “We’re really removed from the 2020 wildfire season. Most people are thinking the problems are over.”

For those concerned with restoration work in the Poudre watershed, the Cameron Peak Fire provoked a sense of déjà vu. The watershed had been damaged by a wildfire in 2012 that caused problems for several years.

As the volunteers gathered at the start of the workday at the Lazy D Ranch, Daniel Bowker, forest and fire project manager for the Coalition to Protect the Poudre River Watershed, told them that when he first arrived on the job in 2018, work on restoring the damage from the 2012 fire was just being completed.

“What we’re going to be doing today is a start,” he told the group. “This is going to be a long-term project — many years of doing this kind of work.”

The Cameron Peak Fire burned 208,000 acres, more than half of them in the Poudre watershed. Mr. Bowker and many others had spent the spring poring over maps, prepared by federal agencies following aerial surveys, that showed the severity of the burn over the entire acreage.

Devastation from wildfires is far from uniform. If a fire travels quickly, there may be little or no damage to the tree canopy, underbrush and soil, and the area may be at little risk of erosion.

At the other extreme, a hot-burning, slow-moving fire may burn everything — trees, underbrush, even the organic layer in the soil, creating ash and releasing nutrients. Waxy compounds in the leaf litter will vaporize and later be deposited on the soil, so that it repels water rather than absorbing it. That will increase runoff and erosion.

In the Cameron Peak Fire, more than one-third of the land suffered moderate to high burn severity. About 10,500 acres had been identified as high-priority areas that were likely to suffer severe erosion, Mr. Bowker said.

“We looked at where the major impacts are going to be in the watershed,” he told the volunteers, “and you’re standing on one of those today.”

In addition to staking the straw tubes, called wattles, across one hillside, the volunteers spread mulch and seed. “It’s not hard work, but it’s a lot of work,” said Tim Cochran, whose wife, Carol, and her family have owned the ranch for generations.

Nearby, another crew of volunteers was working on a slope where Ms. Astvatsaturova and others had determined that the water was likely to drain into a gully and run down in a deeper torrent that could worsen erosion. To slow that water, the team built a series of log-and-rock weirs, or dams, every 10 feet or so down the gully.

At the end of the day, the volunteers had worked on perhaps an acre of burned forest, a tiny fraction of the amount that needed to be restored. As in the Colorado-Big Thompson watershed, aerial mulching would treat much more acreage more quickly. But that would not start until July, and at a cost of several thousand dollars an acre there was not yet enough money to cover all the high-priority areas.

And even if all of those slopes were treated, the monsoon rains are finicky, Ms. Kovecses said.

“We don’t have great information on, or the ability to predict, when and where those rain events are going to happen,” she said. “We could mitigate every square inch of our high-priority area, but the storms may happen somewhere else.”