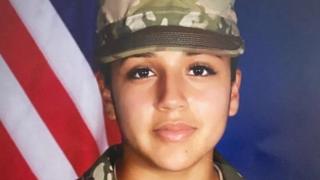 A woman has been charged in the case of a missing Texas soldier whose body she is accused of helping to dismember and bury, prosecutors say.

Cecily Aguilar, 22, faces one count of conspiracy to tamper with evidence in the disappearance of Private First Class Vanessa Guillen.

Ms Guillen, 20, was last seen on 22 April at the Fort Hood military base where she worked.

Human remains believed to be hers were found in Bell County earlier this week.

Investigators said the suspect, a junior soldier at Fort Hood, killed himself as police closed in on him after fleeing his post on Tuesday.

“While law enforcement agencies attempted to make contact with the suspect in Killeen, Texas, Specialist Robinson displayed a weapon and took his own life,” Damon Phelps, of the US Army’s Criminal Investigation Division, said at a news conference on Thursday.

Ms Guillen’s family has called for a congressional investigation into the Fort Hood base.

They allege that Ms Guillen had been harassed by someone within her unit, but officials have said they have no report to indicate she was sexually harassed or assaulted.

Why has Ms Aguilar been charged?

A criminal complaint against Ms Aguilar says Mr Robinson told her he had killed a female soldier at Fort Hood.

He admitted to bludgeoning Ms Guillen to death with a hammer in the armoury of the base before moving her body to a remote site, prosecutors said.

After her disappearance, around noon on 22 April, Ms Guillen’s car and barracks keys, ID card and wallet were found in the armoury room.

Mr Robinson allegedly attempted to dispose of Ms Guillen’s body, enlisting the help of Ms Aguilar, who is the estranged wife of a former soldier at the base.

When Mr Robinson showed Ms Aguilar the body, she recognised it to be that of Ms Guillen, the criminal complaint says.

Prosecutors said the pair attempted to dismember the body with a “machete-type knife” before burying the remains in three holes. They returned later to fill the holes with concrete, prosecutors said.

Ms Aguilar is being held in custody while the criminal investigation continues. If convicted, Aguilar could face up to a 20-year prison sentence. 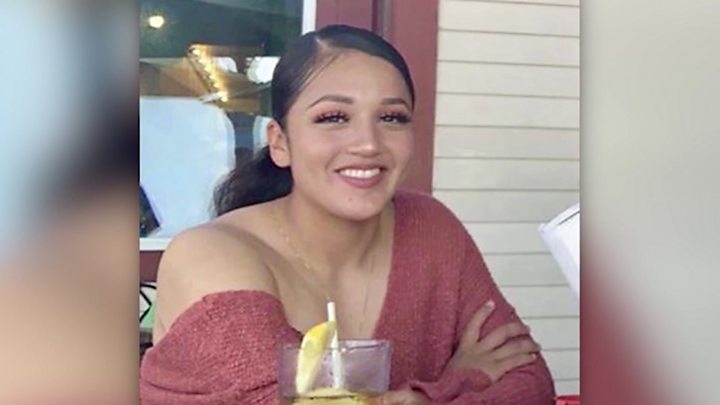 The remains have not yet been positively identified as Ms Guillen’s.

Agents from the US Army Criminal Investigation Command, Texas Rangers, FBI and local police found the remains near the Leon River, about 30 miles (48km) from Fort Hood, after receiving a tip off.

Ms Guillen, a small-arms repairer with the 3rd Cavalry Regiment, is originally from Houston, Texas – about 200 miles (320km) from Fort Hood.

She was promoted to specialist on Wednesday due to her time in the military, Fort Hood officials said.